As we often highlight on Fuel for Thought, the United States is leading the world in emissions reductions. Between 2005 and 2019, U.S. energy-related CO2 emissions had declined by 14.3 percent, or 858 million metric tons (MMT CO2)—more than any country in the world. Last year, COVID-related economic disruptions led to a rapid, but anomalous, further decline of 569 MMT CO2, bringing U.S. CO2 emissions to their lowest level since the early 1980s, at 23.8 percent below 2005 levels.

Of course, as the U.S. economy recovers from the pandemic, energy demand has rebounded with it, leading to emissions impacts that are influenced by a number of factors. Recently released Energy Information Administration (EIA) data provide a mid-year look at what the economic turnaround could mean for U.S. CO2 emissions in 2021. Today, we’ll review the role that the power sector is playing in these trends.

In 2020, sharp declines in commercial and industrial power demand drove total electricity sales 3.9 percent lower than 2019 levels. As we covered in an earlier piece, this trend was offset somewhat by a significant increase in residential power sales due to people spending more time at home. While the overall sales impact of COVID was modest, the emissions impact was much greater. Total 2020 electricity emissions fell by more than 10 percent, as renewables continued to increase and coal generation waned. (By the way, since peaking at about 2,400 MMT in 2005 and 2007, electricity emissions through 2020 had declined more than 40 percent (900 MMT CO2)—far more than any other economic sector.)

In 2021, however, these trends are reversing. Year-to-date power sales through June have returned to nearly the exact level they were in 2019, with residential sales slightly higher (5%) and commercial and industrial sales still a bit lower. This is all expected as the economy returns to form and the impacts of the pandemic fade, but the more interesting trends involve the dispatched electricity resource mix, and its impact on emissions.

As shown in the chart below, total electricity sales have so far been higher in each month of 2021 compared to 2020. The distribution of that increased generation varied significantly across resources, with coal and renewables benefiting the most, while generation from natural gas and hydroelectricity is showing notable declines (more on both below).

While EIA does not directly report CO2 emissions alongside this data, we are able to derive credible estimates from a combination of power sales, generation data, and fuel mix. Based on this information, we developed the chart below showing monthly emissions data for 2021 compared to the previous two years. Overall, we estimate that electricity emissions in the first half of the year were 14 percent (89 mmt) higher than in 2020, but are still tracking about 5 percent (36 mmt) below 2019 levels. The many uncertain economic and COVID-related factors make it difficult to predict if past is prologue, but with emissions in June exceeding not only 2020 but 2019 levels as well, it seems likely that they’ll be significantly higher for the year. (Note: a table showing detailed emissions estimates appears at the end of this column.)

What’s driving those emissions increases? It’s more than just a bounce-back in overall demand. Two factors seem to stand out— (1) higher natural gas prices leading to baseload generation shifting in favor of coal, and (2) a precipitous decline in hydroelectric power that must be replaced primarily by a combination of natural gas and coal resources.

After plummeting natural gas prices and reduced overall demand led coal generation to fall nearly 20 percent last year, it has recovered significantly and is now tracking at about 7 percent below 2019 levels. The main factor is economics. Since bottoming out in the middle of 2020, natural gas prices have steadily risen over the last 12 months, leading many utilities to shift back to coal as a lower-cost fuel source. The unique chart below illustrates the importance of fuel price differentials to generation shifting. On a per megawatt-hour fuel cost basis, natural gas has become over $20 more expensive than coal for the first time in seven-plus years. While the overall share of electricity generated by natural gas still exceeds coal by more than 10 percent, the gap has closed significantly during this time period.

Finally, while wind and solar power have continued to increase their respective share of total U.S. generation, significant declines in hydro generation due to drought conditions have forced grid operators to increase use of fossil resources. Nationwide, year-to-date generation from hydroelectric power is 13% below 2020 levels. The falloff is not just a western phenomenon either, with major hydropower states such as New York, Alabama, and Tennessee experiencing output declines. Conditions in California are causing the greatest impact, as hydro generation there is a whopping 39% below 2020 levels. This has contributed to regulatory decisions to build five temporary natural gas peaker plants and designate numerous older gas plants as “must-run” resources in order to reduce blackout risks during periods of high summer demand—a stark reminder of the importance of ensuring reliability concerns are not ignored as part of the push for a cleaner grid. 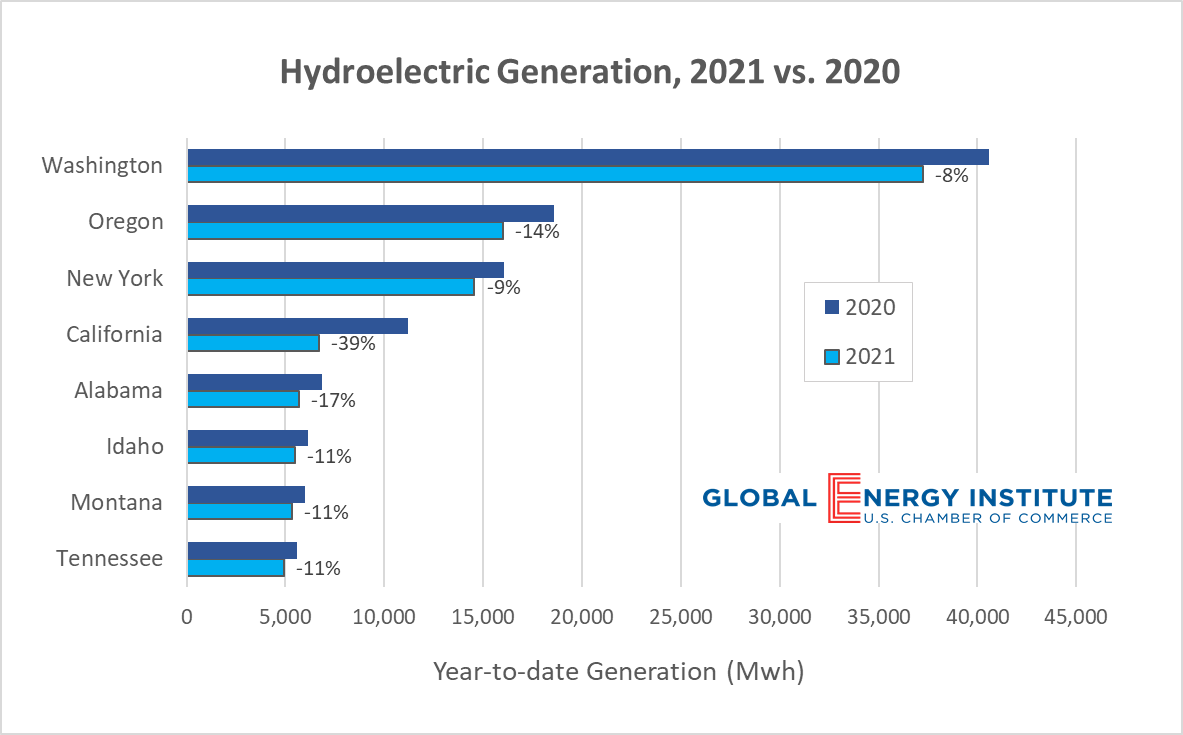 The power sector trends we are seeing in 2021 exemplify the importance of investing in significant research and development efforts to both demonstrate and deploy the cost-effective, reduced emissions technologies that will permanently lower power sector emissions, while preserving reliability and economic growth. We have strongly supported these efforts as set forth in the Energy Act of 2020, and are continuing to push for the full funding of these efforts as part of the bipartisan Infrastructure Investment and Jobs Act that is set for a vote in the House of Representatives later this month. The technology development that will be funded by these bills is absolutely critical to achieving these goals. If successful, lower-emission resources will demonstrate affordable and reliable energy delivery across multiple economic sectors and ambitious carbon reduction goals can become a reality. 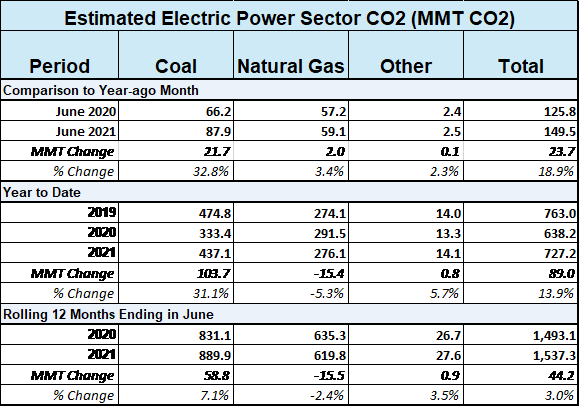