It is no secret that New York has become openly hostile to energy infrastructure.  Led by Governor Andrew Cuomo and well-organized allies in the activist community, the state has worked to block permitting and construction of a number of pipelines that would deliver affordable energy to citizens throughout the Northeast.  This is one reason why New York consumers pay a 40% premium for electricity compared to the national average, and manufacturing and industrial investment lags behind most other states.  If you don’t build it, they won’t come.

But you may not know that New York has been looking to inflict its own pain on other states as well.  If you live, work, or depend upon the local economy in nine “upwind” states—Illinois, Indiana, Kentucky, Maryland, Michigan, Ohio, Pennsylvania, Virginia, or West Virginia, New York is seeking to shrink your slice of the economic pie.  They’re targeting pipelines, power plants, compressor stations and a wide range of manufacturing facilities by seeking to impose new limitations and costs, making some of them unprofitable and jeopardizing thousands of jobs.

Specifically, the Cuomo Administration has asked the Environmental Protection Agency (EPA) to shut down or directly impose sweeping emissions limitations on 346 facilities across a broad swath of the country.  What empowers New York to attempt this overreach on nearly one-fifth of the nation?  New York is trying to twist a little known provision of the Clean Air Act known as Section 126.

Section 126 was designed by Congress as a backstop for limited situations in which a state has failed to address the interstate transport of certain air emissions emanating within the state’s borders.  This “good neighbor” provision allows one state to petition the EPA to force another state to fix violations of these interstate transport obligations.

The program is designed to target “a major source or group of stationary sources” whose emissions contribute significantly to air quality problems in downwind states.  This is a reasonable concept.  However, New York’s effort to target a whopping 346 separate sources shatters any reasonable interpretation of “major source or group,” and fails to demonstrate the existence of relevant air quality problems within its own state borders.  Quite simply, if almost all of New York’s counties currently are projected to continue to comply with 2008 and (ultimately) 2015 ozone guidelines, how can hundreds of facilities beyond New York’s borders significantly contribute to non-existent ozone impairment?

New York’s attempt to expand its anti-energy “Keep it in the Ground” policies upon hard-working, industry-rich states must be rebuffed.  If the EPA were to grant New York’s request, the sources identified in the petition must cease operations within three months unless they comply with emission controls and compliance schedules imposed by the EPA. Fortunately, the U.S. Chamber of Commerce is on watch, and we have just gone on the record in opposition to this unwarranted and unsupportable hyperextension of Clean Air Act Section 126.

As a leading member of the Air Stewardship Coalition, which includes a number of impacted companies and a broad spectrum of trade associations, the Chamber is speaking up for the nine targeted state economies and thousands of jobs put at risk by New York’s bold overreach.  You can see for yourself the broad range of businesses being threatened in New York’s petition (pages 33-42).  Is your employer listed?  Maybe your neighbor’s employer or your region’s largest taxpayer, which supports your schools, libraries, and municipal services?  Even if you are not directly impacted, the additional and unjustified costs that New York is seeking to impose upon your state’s businesses will result in higher costs, for no real benefit – in New York or elsewhere.  Not very neighborly.

We have identified the threatened facilities on the map below.  Not surprisingly, power plants and refineries are major targets, but so are countless other facility types.  From a municipal waste renewable energy facility next door in Pennsylvania to a box factory in rural Virginia to steel plants in Michigan, New York’s petition seemingly spares no one.  Even university facilities at Purdue, Notre Dame, and Michigan State are targeted.  Moreover, most of these facilities are hundreds of miles away from New York and located in areas with excellent air quality.  For example, Purdue University is more than 400 miles away from New York’s westernmost border, yet its campus utility plant is being blamed for being a “bad neighbor”. 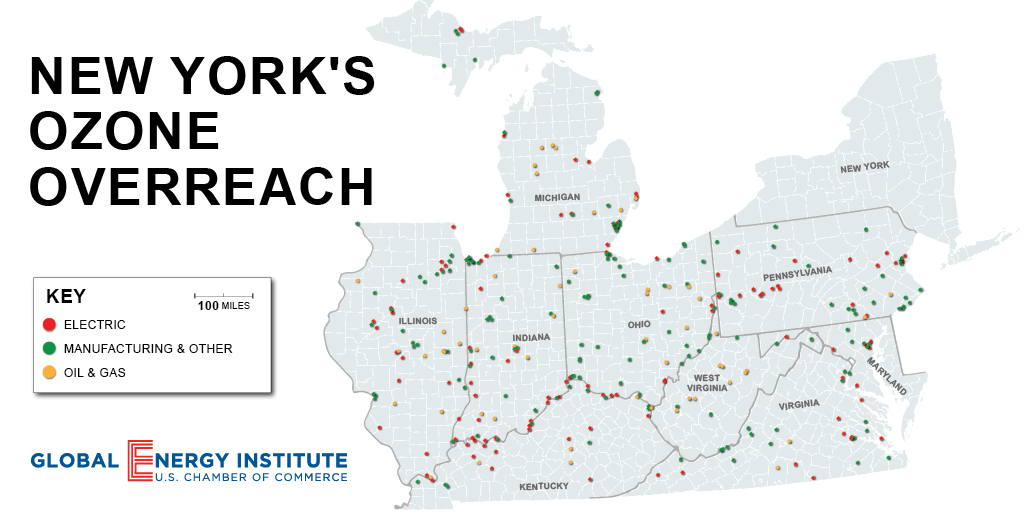 Fortunately, we believe that New York has failed to present a compelling case, making it much easier for the EPA to reject the unprecedented relief it seeks.  First, New York has failed to demonstrate, consistent with EPA regulations and established practices, that any actionable attainment issues exist within New York State.  Second, New York’s antiquated, outdated, and secretive modeling effort fails to link any of the 346 targeted sources to potential ozone compliance issues in New York.  Third, even though Section 126 identifies this as a prerequisite to the relief sought, New York has dodged its obligation to identify cost-effective emissions controls that could be implemented at the hundreds of sources listed in its petition.  Pursuant to the Clean Air Act, the EPA is not empowered to impose new controls on these 346 sources due to these three fatal flaws.

If you are surprised that one state can petition to the federal government to shut down hundreds of businesses in distant states, you are not alone.  You may not have heard about New York’s effort on your local news, though its potential implications would certainly hit close to home.  However, businesses identified in this petition should know about the target that New York has placed on their back.  We’ll keep you posted on the progress of this petition, and do our best to make sure New York’s state of mind doesn’t gain any traction with EPA.