There’s no doubt that many challenges remain in the global quest to reduce emissions and combat climate change.  The American business community is fully committed to doing its part, with billions of dollars in investments and strong company commitments.

But that shouldn’t stop us from recognizing the incredible progress that the country has made to continuously improve the overall state of the environment.

This progress often doesn’t get much attention, and as a result the public remains pessimistic about the environment. In March, Gallup released its annual survey of Americans’ views on various environmental issues. The findings show that 59% of Americans believe that the quality of the environment in the U.S. is getting worse, versus only 35% that think it is getting better. With respect to air quality specifically, 75% of Americans say they worry about air pollution either a great deal or a fair amount. This pessimism has remained largely unchanged over the last 20 years of Gallup surveys.

The good news about the environment and air quality is what some refer to as “The Greatest Story Seldom Told”—namely, America’s underappreciated standing as having one of the best and cleanest environments in the world. As we celebrate Earth Day 2022, let’s take a look at some of these achievements.

The electric power sector is leading the way in domestic emissions reductions. Consider:

There has also been a great deal of progress on vehicle emissions. The increasing availability of hybrids and electric vehicles along with widespread use of more advanced powertrains, sensors and emissions control technologies have significantly improved the environmental footprint of the transportation sector. For example:

The contributions from America’s industrial sector are another overlooked contributor to air quality improvements.

These success stories only scratch the surface, but when added up across the economy, it should come as no surprise that nationwide progress on air quality has been equally impressive. As EPA highlights in its annual State of the Air report and in the striking chart below, between 1980 and 2020 the U.S. economy grew by 173% and our population grew by 46%, while aggregate emissions of key pollutants fell by 73%. 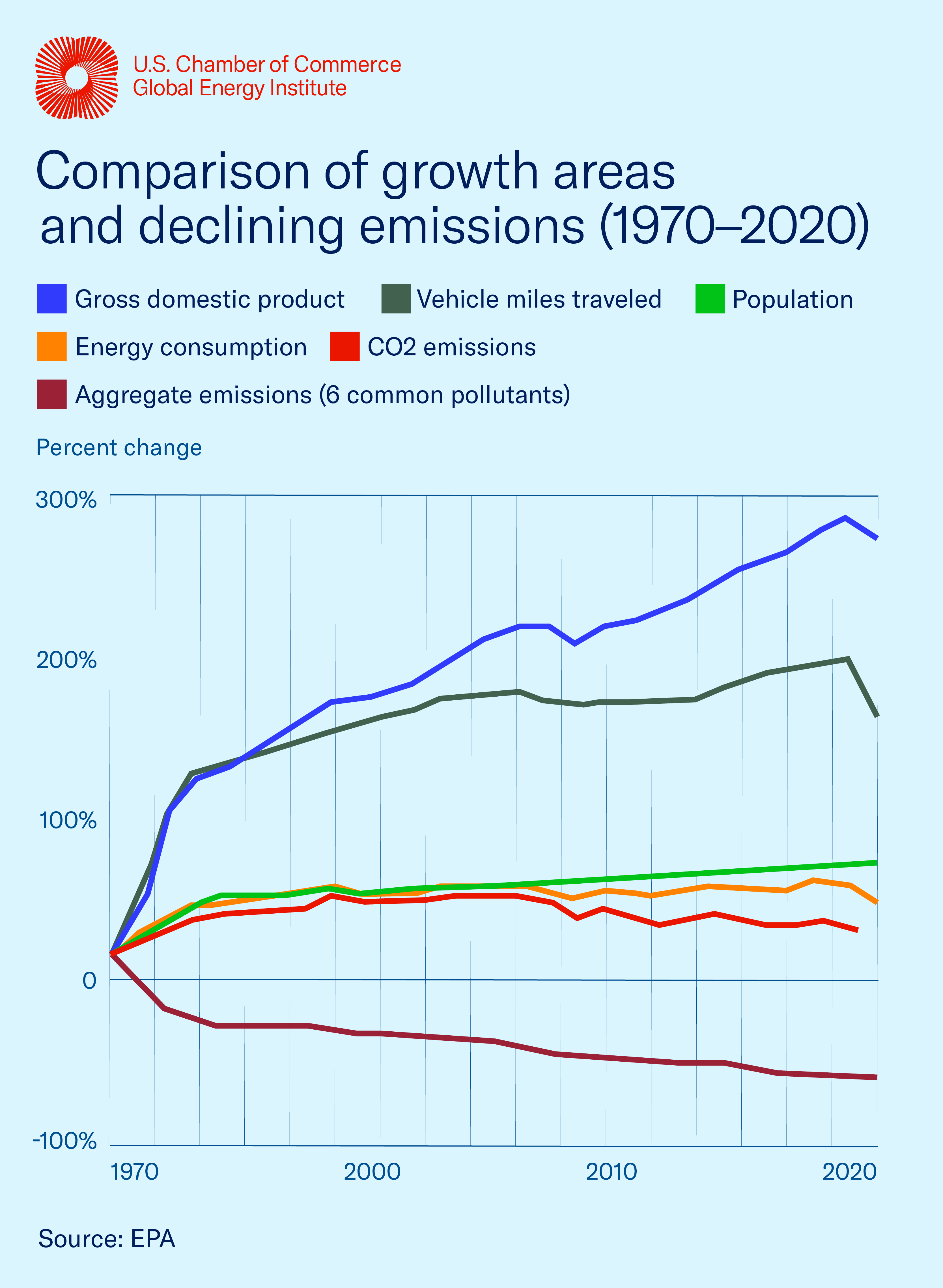 The chart above does not include greenhouse gas emissions (GHGs), but progress on this front is no less impressive. As shown below, the U.S. reduced economy-wide CO2 by 863 million metric tons between 2005 and 2019. That is far more than any country in the world, and the equivalent of taking 188 million cars off the road. Unfortunately, global emissions have increased rapidly during the same time period, illustrating the need for what we call the technology imperative: we must develop and commercialize emissions-reducing technologies that are cost-effective enough to promote global adoption. That’s why passage—and now implementation—of climate innovation measures in the Energy Act of 2020 and the Infrastructure Investment and Jobs Act have remained a top Chamber priority. 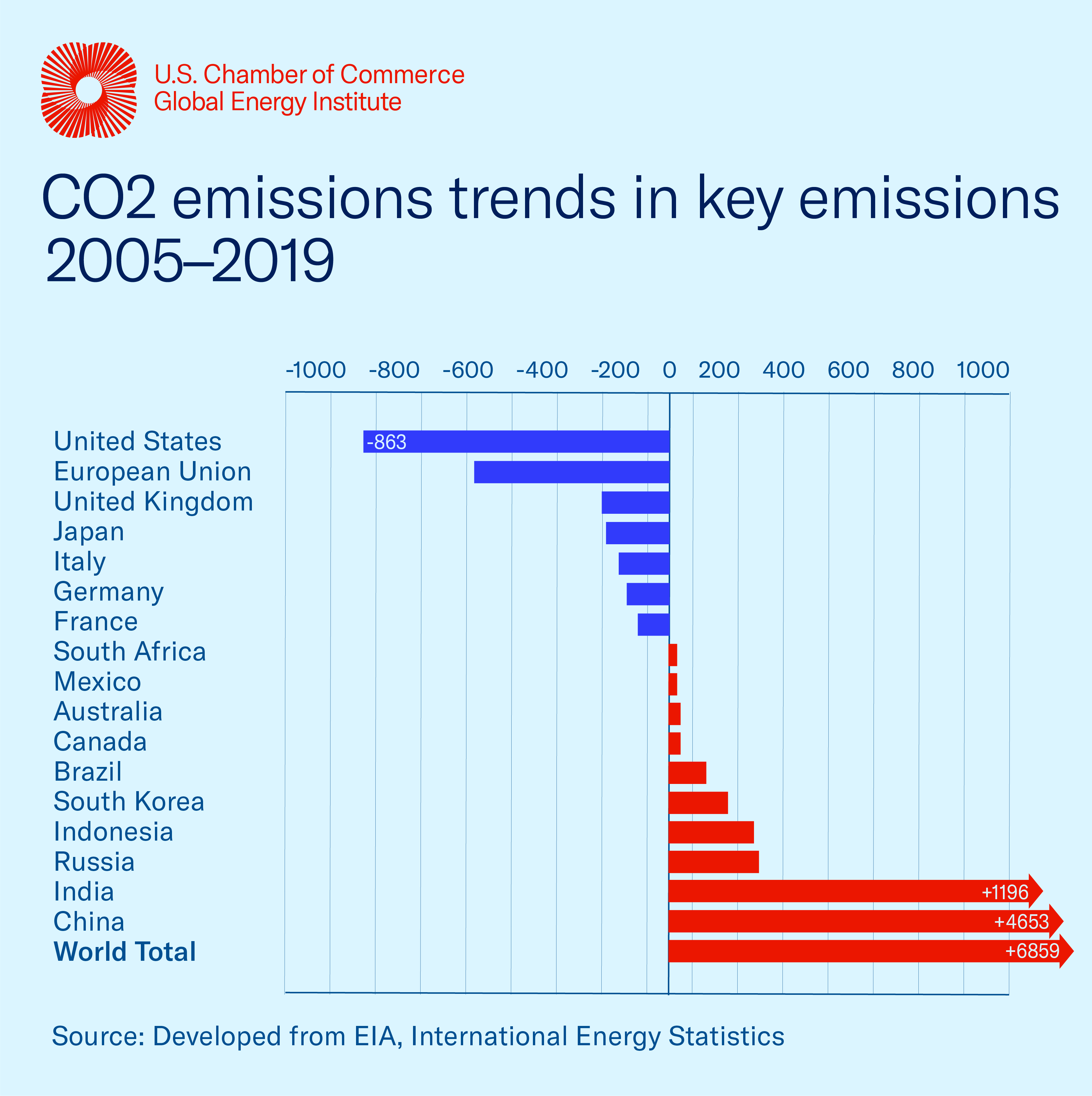 One final point on the state of U.S. air quality relative to the rest of the world: World Health Organization data on fine particulate matter (PM 2.5) levels—considered the best proxy for air quality comparisons—show the U.S. has some of the cleanest air on the planet, with urban PM 2.5 concentrations trailing only sparsely populated Canada and Australia among major countries. The same goes for city-level data, with major U.S. metropolitan areas (indicated in blue) generally exceeding the air quality of counterparts in Europe, Asia, and elsewhere. 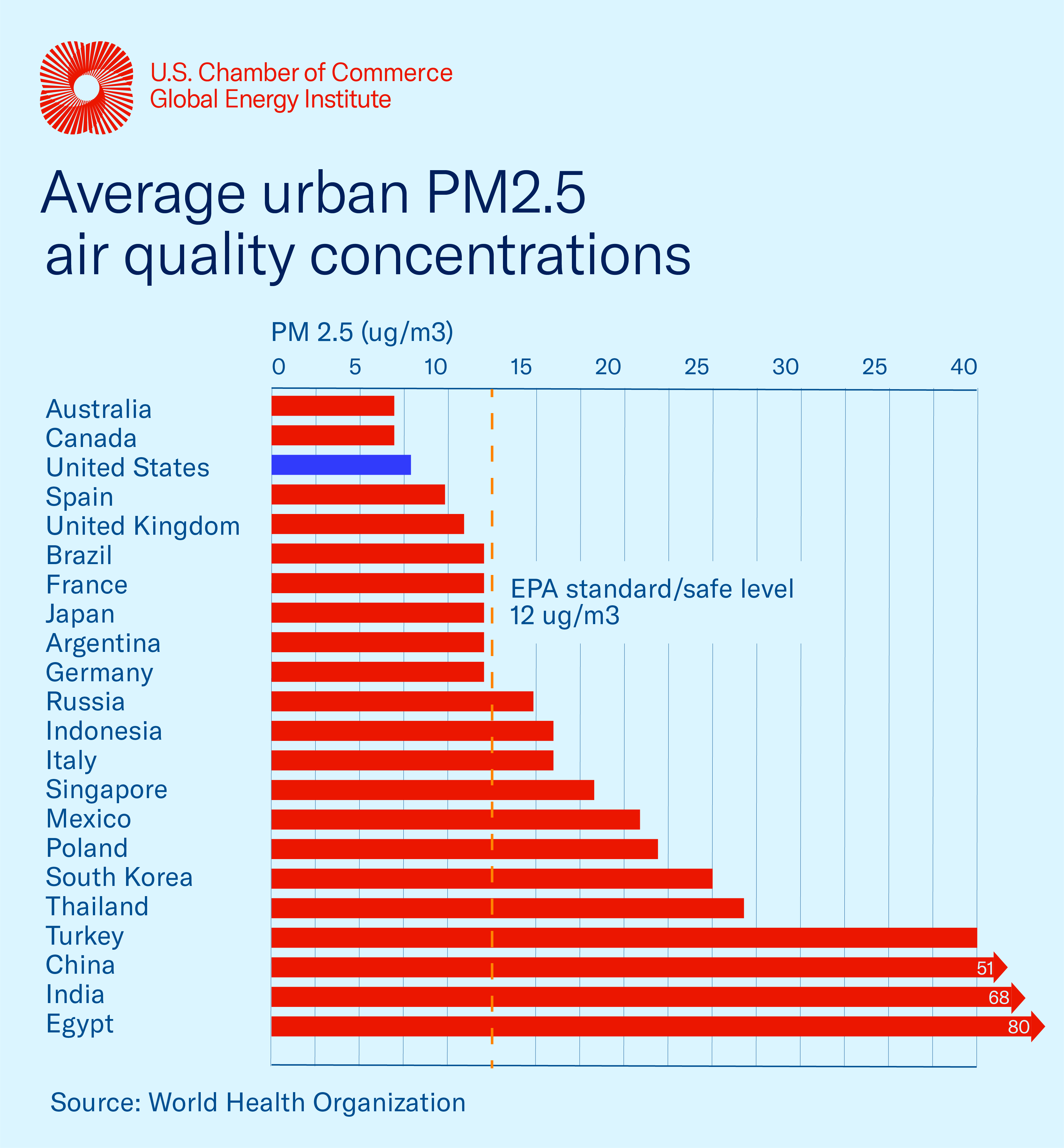 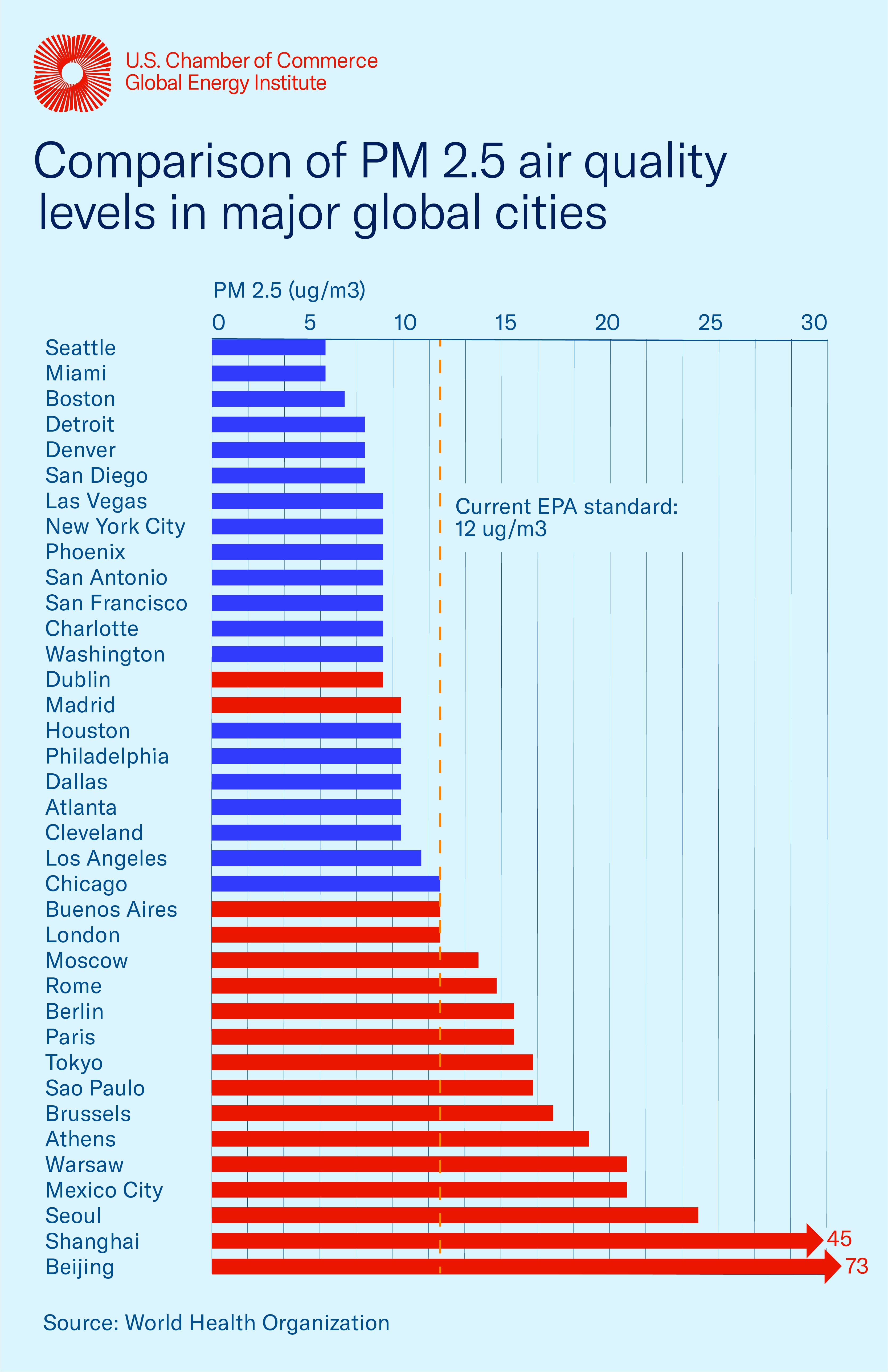 There should be no doubt that more work needs to be done. A multitude of ambitious emissions targets exist at the state, local, and international levels, as well as from a growing number of businesses. The path to meeting them is likely to be uneven and dependent on promising but uncertain technological breakthroughs in the years ahead. But by assuming a global leadership role on climate and the environment, the United States has an opportunity to develop and export technologies that will help improve the entire planet, while supporting jobs and economic growth at home.

But this Earth Day, we should be encouraged by the progress that has been made to date and the collective investments and innovations that it has taken to get there and that will support even cleaner air and improved climate in the future. That’s something to celebrate—even if it is the greatest story still seldom told.