IEA WEO2019 looks at world energy markets from 2018 out to 2040. It provides three different scenarios—the Current Policies, Stated Policies, and Sustainable Development Scenarios. For this blog, we’ll concentrate on its mid-range “Stated Policies Scenario,” which assumes current policies and the implementation of announced, or “stated,” policies.

Here are the highlights:

U.S. Shale Output remains Robust throughout the Forecast Period: How many times have we heard “experts” say the U.S. shale revolution won’t last? Too many. IEA takes another view.  It expects production from U.S. shale plays will stay “higher for longer, reshaping global markets, trade flows and security.”  Indeed, the increase in U.S. crude oil and natural gas output are by 2030 estimated to account for an astonishing 85% of the increase in global oil production and 30% of the increase in global gas production. That’s great news for the world’s energy security and for America’s geopolitical standing. IEA notes that because of greater output from the United States, the share of world oil production controlled by the Organization of Petroleum Exporting Countries and Russia doesn’t increase, and in fact, slips a bit by 2040 despite a 9% increase in global output.

North America Rivals the Middle East in Energy Output: IEA’s projection also shows that production from Canada and eventually Mexico—whose output has been declining steadily for many years—will experience increases, making North America the center of oil and gas production. By 2040, IEA forecasts North America will produce more oil than every region of the world except the Middle East and more natural gas than any other region. 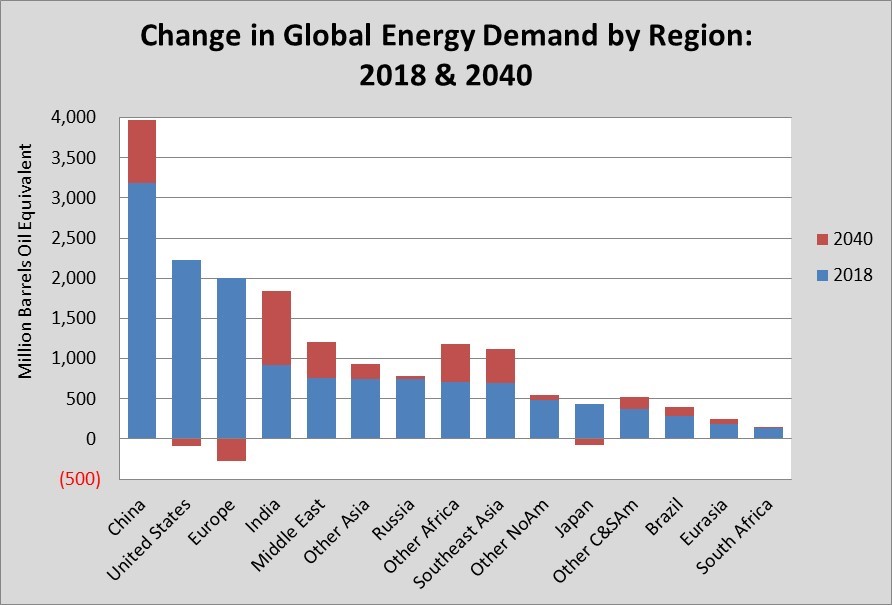 All Developing Economies see High Demand Growth, but Demand Grows Highest in Asia: Between 2018 and 2040, demand in India is forecast to double by 2040 while demand in South East Asia grows 59% and China’s demand 25%. At about 40% today, the Asia Pacific region will consume 46% of the world’s energy by 2040. Africa (excluding South Africa) also will see demand surge, rising 67%; the Middle East 58%; and Central and South America 38%. In contrast, Europe, Japan, and the United States will reduce demand by 14%, 19%, and 4%, respectively.

Although Renewables and Nuclear Power Grow, Hydrocarbon Fuels Remain the Mainstay of Global Energy Supplies: Combined petroleum, natural gas, and coal use is forecast to grow 13% between 2018 and 2040, mostly because of a 36% jump in natural gas demand (petroleum grows at a more modest 9% and coal stays flat). Although the share of total global energy demand met by fossil fuels is forecast to decline by 2040, hydrocarbons still are expected to account for 74% compared to 81% in 2018. While the share of total demand from natural gas increases in 2040 compared to 2018 (by 3 percentage points), the share from oil and coal each decreases (by 3 and 6 percentage points, respectively).

Electricity Demand Grows Rapidly in Developing Countries: IEA is forecasting a 56% increase in global electricity generation between 2018 and 2040, most of which will come from developing countries. The fastest growth will occur in developing economies (886%). Generation is expected to jump more than double in India (183%), Southeast Asia (124%), and Africa (120%). Strong growth also is forecast in the Middle East, China, and Central and South America. In contrast, electricity demand in advanced economies Europe and North America are each expected to increase by just 15% by 2040. These data suggest access to electricity will continue to increase and lift people out of energy poverty. By 2040, 41% of the electricity generated in developing economies will be from renewables (mostly hydro, solar PV, and wind) and 32% from coal. While generation from coal increases by 25% in developing countries, it used for power generation is cut in half in advanced economies.

Price of Crude Oil Inches Above $100: In IEA’s Stated Policies Scenario, oil demand continues to rise, but its growth is moderated by a variety of new policies and technologies that promote greater efficiency. In these circumstances, the price of crude oil is expected to more than double, from about $68 dollars in 2018 to $103 per barrel (in 2018$) by 2040.

Renewables Use Grows Rapidly: Total demand for renewable energy sources—including hydropower, wind, solar (PV and concentrated), biofuels, marine, geothermal—is expected to increase about 83% by 2040, at which time they will account for 21% of overall global energy demand from 14% in 2018. Strong growth is observed in both advanced and developing economies. Solar energy is projected to increase almost 700% in the Stated Policies Scenario rate and by 2040 will supply nearly eight times as much energy as it did in 2018. Over the same period, wind energy will supply four times its 2018 level and geothermal three-and-a-half times its 2018 level.

Although bioenergy is slated to grow a comparatively sedate 35%, it will nonetheless remain the most widely used renewable energy source in 2040, accounting for about half of all renewable energy in 2040 (down significantly from two-thirds today). About half of current biomass in use today is traditional solid biomass—wood, dung, etc. The use of modern biomass (mostly as transportation fuels but also in power generation), however, grows rapidly and by 2040 accounts for more than two-thirds of total biomass demand in 2040.

Nuclear: Nuclear power is forecast to grow 28% between 2018 and 2040, and its share of the global energy supply will be little changed (about 5%). Many advanced economies are expected to be decommissioning close reactors, resulting in a 17% decline in generation by 2040 (though Japan is an exception—its nuclear generation is expected to recover to increase as reactors closed after the Fukushima Daiichi accident are brought back on line). Large increases in China and India, however, should propel a hefty 153% increase in generation for developing economies.