The goal of our EnergyInnovates initiative is to highlight promising and interesting technology and people that are at the forefront of new energy solutions.  This fall, I had a chance to spend some time with the dynamic team at NET Power who are the very definition of innovators—and are changing the way we think about the electric power sector and carbon emissions.

NET Power is a collaboration between 8 Rivers Capital, Exelon and CB&I (as well as a partnership with Toshiba; Occidental Petroleum also was recently announced as a collaborator, pending approval).  The company’s headquarters is based in Durham, N.C.at the refurbished American Tobacco Campus, and has the look and feel of a tech-startup.   And in a way, that’s what NET Power is.  Young, dynamic engineers are joined by an experienced management team to bring to fruition a new kind of power plant—one that relies on carbon dioxide emissions itself as an energy source.

Rodney Allam, a British-born retired chemical engineer, came up with NET Power’s unique approach of capturing carbon dioxide and using it directly as a power source.  While conventional power plants generate electricity by heating steam, which spins a turbine to generate electricity, NET Power’s turbines are spun by pressurized carbon dioxide itself.  The system, now known as the Allam cycle, is attractive because it avoids emitting CO2 and conventional pollutants, making it a truly clean solution.

In order to prove the Allam Cycle design in a real-world setting, NET power has developed a $150 million demonstration natural gas plant in La Porte, Texas that is completing testing and will soon begin operations as the world’s first zero-emissions fossil fuel power plant. Eventually, the company plans to commercialize the technology for deployment around the country, and even the world. Click the image below to watch the full video. 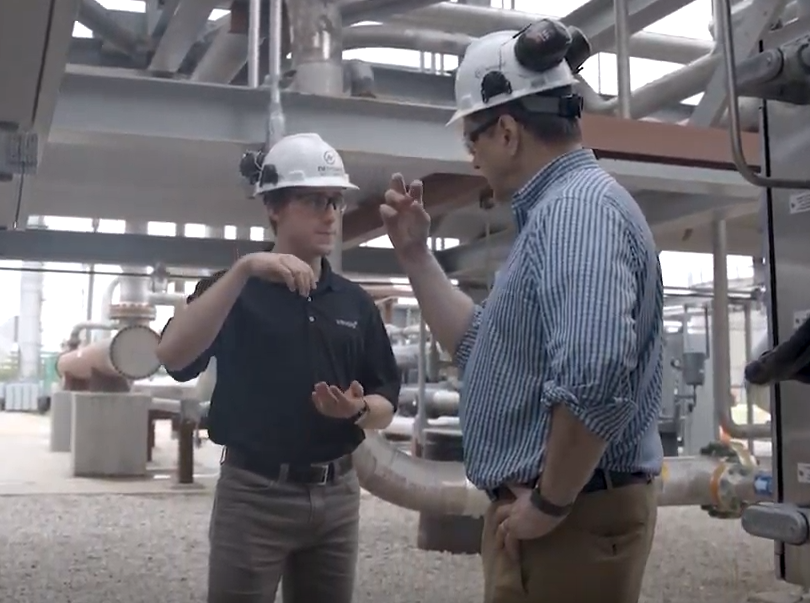 Our videos explore both the technology behind Net Power—as explained by Rodney Allam himself—and the company’s approach to its workforce.  While the siren song of Silicon Valley is a constant allure, 8 Rivers has repeatedly attracted members of the Forbes 30 under 30 to work on Net Power.  Duke University’s Brian Murray helps explain the attraction and the exciting opportunities in the energy field that are available to younger minds.

We appreciate the chance to tell Net Power’s story, and we look forward to the continued growth and success of this idea, which truly demonstrates how much EnergyInnovates.