As the eyes of the world turn to the escalating tensions in Eastern Europe amid growing Russian activity along its border with Ukraine, energy security has emerged as a major component of the geopolitical standoff. European countries are increasingly dependent on Russian energy to power their economies—more than 40% of the natural gas EU countries consume is imported from Russia, and one-third of that amount passes through Ukraine.

With natural gas stocks at historically low levels, prices breaking records, and several weeks of potential winter demand spikes still to come, many European leaders are concerned that a firm response to Russian aggression could lead to energy supply disruptions. It’s a stark reminder that energy security is national security, and as Europe looks to diversify its supplies, the United States is poised to help.

In December 2021, the U.S. exported more liquefied natural gas (LNG) than any country in the world—an incredible achievement for a country whose exports were negligible just a few years ago. While Asia remains the top export destination, many of these cargoes were delivered to Europe (including one that went all the way to Hawaii before making a U-turn back to the UK), providing temporary price relief and offsetting reduced Russian pipeline flows.

Through the first 10 months of 2021, total U.S. LNG exports surpassed $25 billion in value, and IHS Markit is now projecting that America will surpass Qatar and Australia in 2022 to claim global leadership on an annual basis. 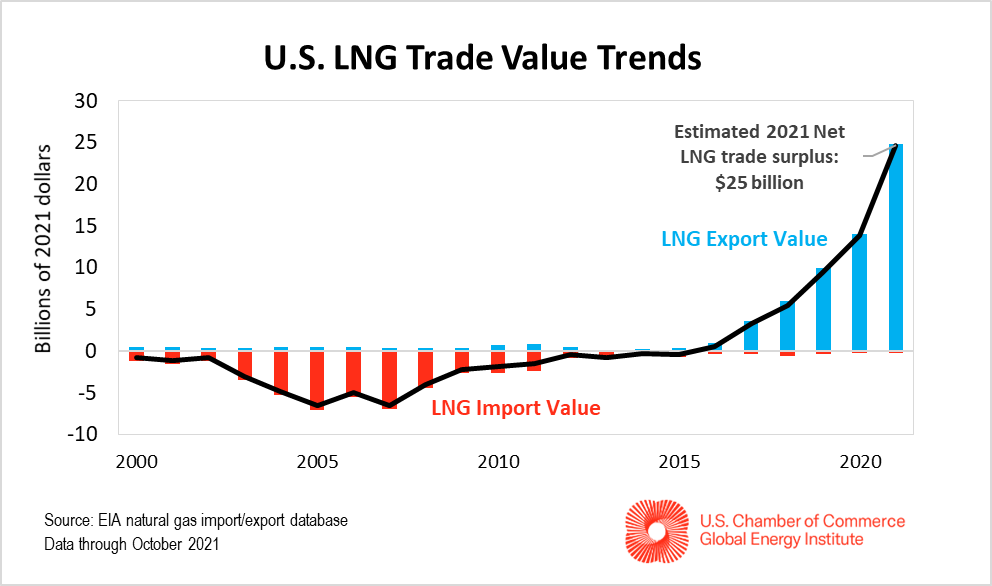 This news comes as some protectionist voices have expressed opposition to U.S. energy exports, arguing that they drive price increases and harm U.S. economic growth. In fact, U.S. natural gas prices did increase from 2020’s historic lows last year as the global economy strengthened, but they remain well below historical averages. They are also far less volatile thanks to abundant domestic supplies, particularly compared to Europe, where benchmark prices quadrupled between the beginning and end of 2021.

Perhaps most important, the Energy Information Administration is forecasting that natural gas prices will remain flat in 2022 even as exports rise, reflecting American producers’ ability to meet domestic demand while also delivering growing supplies to allies and partners around the world. We are therefore heartened that Department of Energy Deputy Secretary David Turk recently testified to Congress that the Biden Administration is not considering a ban on oil or LNG exports.

Moreover, when it comes to prices, America’s households and industrial consumers benefit greatly from our energy advantage. As the charts below illustrate, we pay significantly less than counterparts in Europe and other industrialized nations (these charts are based on pandemic-influenced 2020 data; the U.S. competitive advantage likely increased significantly in 2021 as Asian and European markets faced record prices). 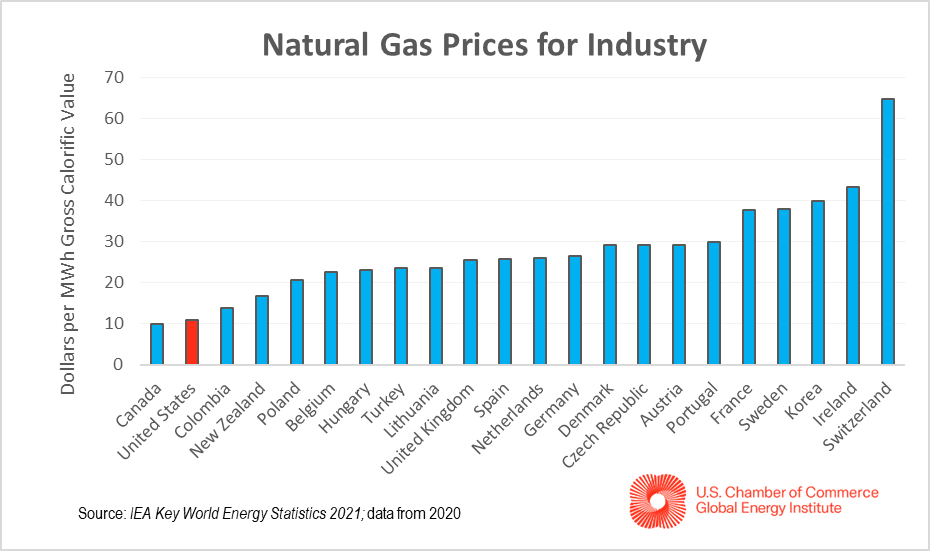 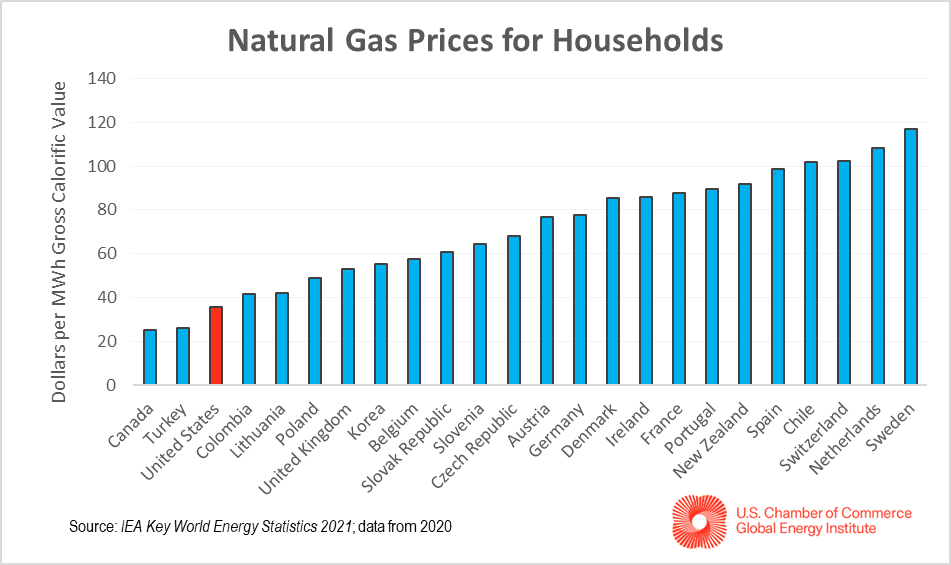 For those concerned about growing trade deficits, it’s also noteworthy that American energy is contributing to deficit reduction. In 2019, the U.S. became a net energy exporter for the first time in 67 years. As the chart below shows, just over a decade ago in 2008, our energy trade deficit peaked at more than $520 billion. Now, thanks largely to shale-driven oil and LNG export growth, it has achieved a modest surplus and is helping to offset steadily growing net imports of non-energy merchandise. 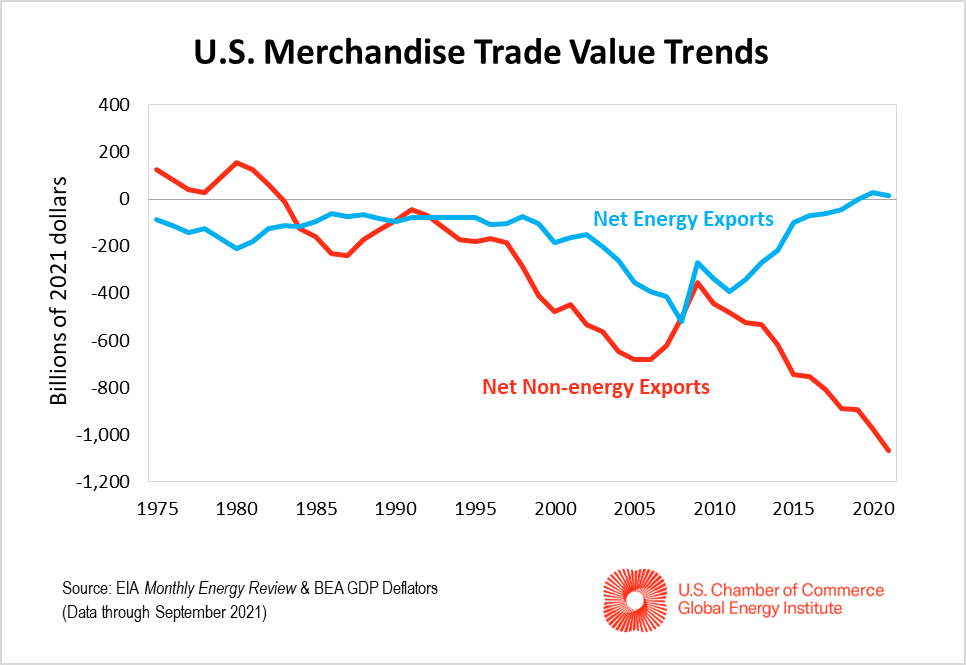 Finally, as we and many others have documented time and again, natural gas is the primary driver behind America’s world-leading emissions reductions since 2005. Similar reductions can be achieved if this model is deployed globally, not only by replacing coal use in developed and emerging economies, but also because life-cycle emissions of U.S. LNG is often superior to that of gas pipelined from Russia.

Add it all up, it’s a clear that U.S. natural gas production delivers a trifecta of benefits: economic advantages to U.S. families and businesses, energy security dividends to allies and partners around the world, and substantial greenhouse gas emissions reduction opportunities.