The world is hungry for energy. The Department of Energy (DOE) projects that global energy consumption will increase nearly 30% between 2015 and 2040, driven primarily by developing countries seeking energy access to lift their populations out of poverty.

One way or another, these countries are determined to ensure that their appetite for energy is met. Thanks to America’s energy abundance, we’re perfectly positioned to provide much of the energy they need. U.S. energy exports are beginning to boom, and the country is now on track to become a net exporter of total energy by 2022—a feat that hasn’t happened since 1953. Most of the attention has been on the shale revolution, which has enabled exports of both crude oil and natural gas output to more than double since 2010. Undergirding this revolution, however, has been America’s consistently strong coal production (now second only to China), which provides another export opportunity.

Those opportunities may soon get a boost, as a key DOE advisory panel, the National Coal Council (NCC), has released a report examining ways to increase coal exports.  The report, Advancing U.S. Coal Exports: An Assessment of Opportunities to Enhance Exports of U.S. Coal, takes a comprehensive look at current domestic and international barriers. 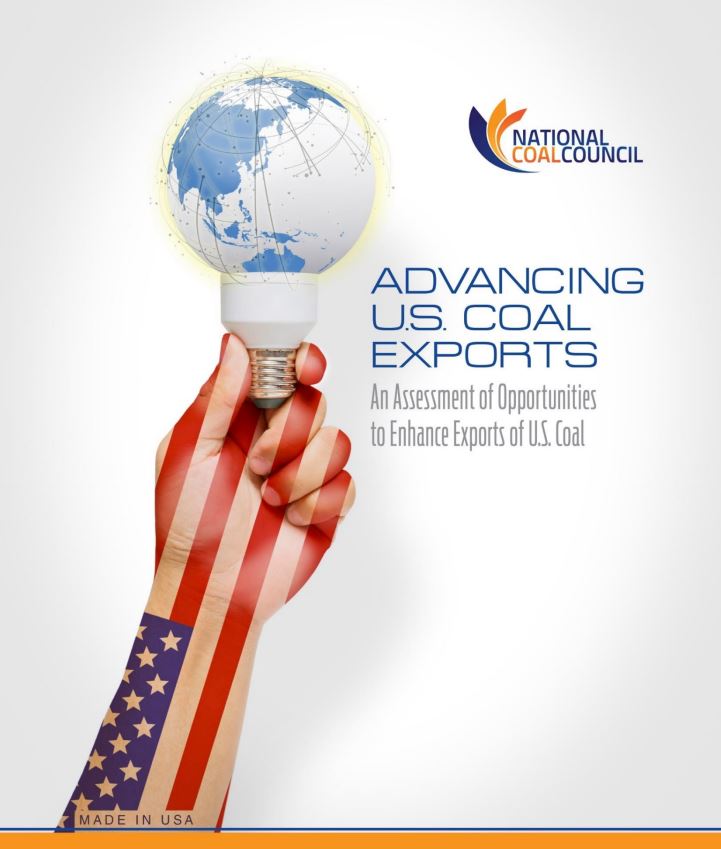 GEI was pleased to participate on the advisory subcommittee that authored the report, which makes 27 recommendations in a number of areas aimed at improving the competitive position of U.S. coal in global markets. In addition to an overarching recommendation calling for establishment of a government-wide Coal Exports Task Force, the NCC report called for policy changes in the following areas:

Expanded exports surely present an attractive opportunity to offset gradually declining domestic demand and build on America’s “energy superpower” status. The Trump Administration has yet to formally respond to NCC’s recommendations, but if it chooses to implement them, it could provide a rare win-win-win-win for the administration. Here is why we see enhancing coal exports as a potential “quadruple win”:

Win #1: Jobs and the Economy: It goes without saying that an increase in coal exports is good for American jobs and the economy. The NCC report notes that coal exports contribute $13 billion to U.S. GDP and support about 100,000 direct and indirect jobs. While these impacts may be modest on a national scale, they are enormously important to the local economies of the mining and port communities in which they are located. Moreover, those are high-paying jobs—workers employed in coal export-related businesses earn an average of $101,000 in wages and benefits, far above the national average of $68,000. As domestic demand for U.S. thermal coal has softened due to market and regulatory developments, sustaining and building upon these economic benefits of U.S. coal will become even more important.

Win #2: Improved Balance of Trade: NCC reports that the import/export market for global coal trade flows surpassed 1.3 billion metric tons in 2017, and that just 10 countries (including the U.S.) accounted for 95% of those exports. This market and the opportunities that come with it will only increase as developing countries electrify and industrialize, as China, India, and many other countries are doing. So there exists a large and growing market that presents a significant opportunity to reduce trade deficits, just as is beginning to happen in oil and natural gas. The report notes, however, that this opportunity is also fraught with risk due to simmering tensions between the Trump Administration and several trading partners:

“[I]n the span of just two weeks in June 2018, China reportedly first offered to increase its imports of U.S. coal in an effort to reduce its $375 billion trade surplus with the U.S., then promptly reversed course and included coal on a list of potential retaliatory tariffs issued in response to $50 billion of Trump Administration tariffs on Chinese goods. On August 8, 2018, China’s Ministry of Commerce announced that it would proceed to impose a 25% tariff on $16 billion worth of U.S. imports, including coal.

This rapid turn of events illustrates how escalating trade tensions are a serious concern that could result in significantly restricted markets for U.S. coal. In addition to China, a number of other countries have initiated retaliation measures to U.S.-imposed tariffs on steel and aluminum imports, and at least one – Turkey – has included coal among the list of targeted U.S. products. Amidst escalating tensions, on August 15, 2018, Turkey raised the level of its coal tariffs from 10% to 14%. Moreover, beyond specific barriers such as tariffs, the general ongoing friction on trade issues threatens to reduce the willingness of U.S. trade partners to enter into agreements to buy U.S. energy resources. [Emphasis added.]

Win #3: Energy Access and Poverty Eradication: While it has long been fashionable to demonize coal, its contributions to improving human welfare around the world via electricity access are massive and undeniable. According to the International Energy Agency (IEA), 1.2 billion people gained access to the electricity grid between 2000 and 2017. Coal-fired power comprised 45% of this electrification, providing affordable energy to a remarkable 540 million people. The NCC report notes that it is difficult to overstate the contributions of this electrification to human health and well-being in these developing countries. As IEA executive Fatih Birol has stated, coal is “the fuel underpinning the rapid industrialization of emerging economies, helping to raise living standards and lift hundreds of millions of people out of energy poverty.”

That importance will continue for the foreseeable future. Unfortunately, an assortment of policies instituted by the Obama Administration sought to cut off financial support for coal-related energy projects in developing countries. The NCC report recommends reversing these policies, noting that doing so would serve to advance advancing humanitarian goals while also expanding opportunities for new coal export partnerships:

As of 2016, an estimated 1.1 billion people still live without access to electricity – between one-seventh and one-eighth of the global population. By 2030, IEA projects that nearly 400 million of these people will gain access, in large part due to new coal-fired power plants, to over 600 gigawatts of electricity which are currently planned or under construction around the world. Accordingly, direct and indirect U.S. government support for financing this electrification would not only advance longstanding economic development and humanitarian objectives but also serve to enhance diplomatic and trade relationships that could enable new partnerships to expand U.S. exports of thermal coal.

By the way, for a great visual illustration of the magnitude of energy poverty that the world must still address, check out IEA’s interactive slider showing electrification potential in Africa between 2017 and 2030.

Win #4: Environment: Finally, in one of the more surprising findings of the report, a case can be made that growing exports of U.S. coal could result in modest environmental improvements. Specifically, the report cites a 2017 Stanford University analysis finding that increasing exports from West Coast ports could reduce overall greenhouse gas emissions, due to substitution effects in U.S. and foreign markets. Further, because Western U.S. coal has significantly lower sulfur and ash content compared to coal produced in Asia, substituting U.S. coal for Asian coal in these regions will reduce emissions of local pollutants that contribute to poor air quality in these regions.

The NCC report also examines the GHG impacts of the aforementioned restrictions on U.S. support for financing international coal projects, particularly power plants. In short, the prior administration’s decision to limit financial support also limited its ability to encourage environmental advancements. Financing was instead secured from other countries, which often funded the lowest-cost, least efficient projects:

“For example, between 2008 and 2016, China, Japan, and Korea combined to supply over 55 gigawatts of less efficient subcritical boiler technology to developing countries. According to the World Coal Association (WCA), a typical one gigawatt subcritical power plant in Southeast Asia emits 1.2 million tonnes of additional carbon dioxide (CO2) annually compared to a supercritical plant of equal size. By this metric, if the subcritical plants supplied by China, Japan and Korea had instead used high efficiency, low emissions (HELE) supercritical and ultra-supercritical boiler technology, annual CO2 emissions from those plants would be nearly 66 million tonnes lower – an amount nearly equivalent to the total annual coal-related emissions in countries such as Thailand and Brazil. These statistics illustrate that, to the extent that U.S.-driven prohibitions on international coal plant financing have led to the deployment of inferior coal plant technologies in developing countries, CO2 emissions have increased as a result – precisely the opposite effect intended by their supporters.” [Emphasis added]

The bottom line is, America is blessed with an abundance of energy and a growing global market that is eager to buy it from us. Recent policy reforms have already boosted oil and gas exports, but a focused effort on coal export-related policies hasn’t happened yet. If the Trump Administration chooses to take up the issue, it could be rewarded four times over with an outcome that boosts jobs, reduces trade deficits, alleviates energy poverty, and helps the environment.