After months of avoiding the issue, the Obama Administration finally released its own progress report on the President’s Paris pledge to cut U.S. net greenhouse gas emissions 26% to 28% from the 2005 level by 2025, with a “best effort” to achieve 28%.

We hate to say we told you so, but it confirms what the Energy Institute and others have been saying all along—there is a large gap between the unrealistically ambitious goal found in U.S. Intended Nationally Determined Contribution (INDC) and the administration’s plan to reach it. No wonder the State Department waited until after the Paris climate conference to release it.

The new analysis is found in the little-noticed 2016 Second Biennial Report of the United States of America, which was submitted to the United Nations amid the New Year’s Eve revels. Before we plunge in to the report’s findings, let’s review the state of play.

According to the Environmental Protection Agency’s (EPA) most recent GHG emissions inventory, net GHG emissions—which include sinks—in 2025 will have to be about 1.7 billion to 1.8 billion metric tons of carbon dioxide equivalent (TCO2 eq.) lower than the 2005 level of 6.4 billion TCO2 eq. (some of these reductions have occurred already). Reducing economy-wide GHG emission by such a large amount will be very difficult to do.

So what does the report do? It provides a look where the Obama Administration believes U.S. net GHG emissions are headed in 2025 with “Current Measures” and where they might be headed with “Additional Measures.” Let’s start with the Current Measures scenario.

The Current Measures scenario includes a host of policies and measures already in place, such as the administration’s revisions to the Corporate Average Fuel Economy standards, EPA’s Clean Power Plan (CPP), the Renewable Fuel Standard, state-level Renewable Portfolio Standards, and the like.

According to the report, under Current Measures the mid-range estimate of net GHG emissions will be 14% lower in 2025 compared to the 2005 base year figure (Table 1 and Figure 1). This means that by the administration’s own reckoning, the reductions that are expected from Current Measures will fall 49% short of the 1.8 million TCO2 needed to achieve the goal of a 28% cut in GHG emissions in 2025.

But here’s the kicker: This 49% emissions gap would be wider still were not for a very large adjustment in the estimates of sequestration removals from U.S. land use, land use change, and forestry—known as LULUCF (and something we covered here). The LULUCF sector in the United States acts as a carbon dioxide “sink,” meaning that on balance our forests and land absorb more carbon dioxide than they release, thus offsetting carbon dioxide emissions from other sources. In its 2016 Second Biennial Report, the administration estimates that sequestration removals from LULUCF will reach between 910 million to 1,055 million TCO2 in 2025. 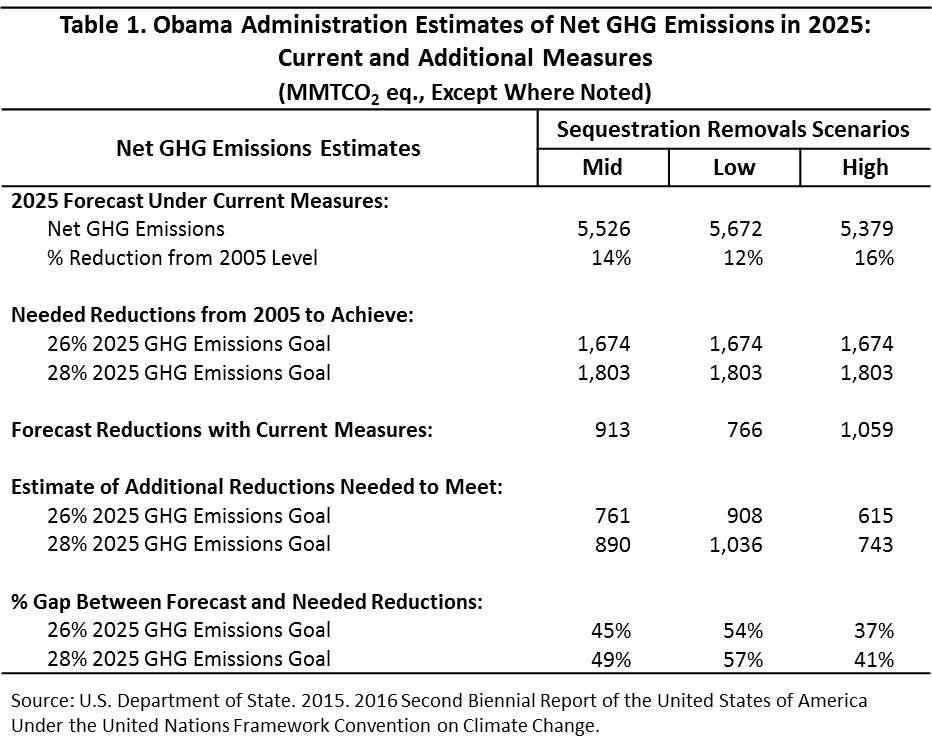 Just two years earlier, in its 2014 Climate Action Report (CAR2014), the administration was predicting a much lower volume of sequestration removals in 2025, in the range of 575 million to 920 million TCO2. In fact, in the CAR2014 the State Department was warning that there were “. . . several long-term anthropogenic and natural forces that, absent changes in policy, demographic, or economic conditions, may act to diminish and, over time, possibly eliminate the U.S. forest carbon sink. [emphasis added]”

The 2016 report tells a different story: “Over the past two years, the U S government has made significant strides in improving data and modeling of emission trends in the LULUCF sector. A multiagency effort was initiated following the First U.S. Biennial Report in 2014. This effort resulted in a number of immediate improvements that will be included in the 2016 U S GHG inventory, as well as additional improvements that are being developed and will be included in subsequent Inventories. [citation omitted]”

Did you get that? In two years, the administration went from cautioning that ability of U.S. forests to gobble atmospheric carbon dioxide was at risk of being significantly reduced if not eliminated entirely to arguing that the trees actually will have much healthier appetite for carbon dioxide in 2025.

The result is the big bump in the estimate of sequestration removals we see in the 2016 report compared to the 2014 report. How big a bump? About 42%, or 310 million TCO2, for the mid-range estimate. This is not a trivial amount. It represents about 17% or so of the entire 1.8 billion TCO2 needed to meet the president’s 28% goal. That’s some adjustment!

This is, to put it mildly, a truly fortuitous—and from the administration’s point of view, an undoubtedly very welcome—LULUCF adjustment, because without it, the administration would be looking at a gap of not 49%, but 67%.

As was mentioned earlier, the 2016 report’s Current Measures scenario also includes EPA’s CPP regulating emissions from exiting fossil fuel-fired electricity generating units. This is the real centerpiece of the administration’s pledge. In its Regulatory Impact Analysis of the Final Rule, EPA estimated that CPP would reduce emissions from the power sector an additional 232 million TCO2 to 264 million TCO2 in 2025.

CPP, however, has serious legal vulnerabilities (at a minimum). In its Utility Air Regulatory Group v. EPA ruling, the Supreme Court warned EPA that, “When an agency claims to discover in a long-extant statute an unheralded power to regulate ‘a significant portion of the American economy,’ we typically greet its announcement with a measure of skepticism. We expect Congress to speak clearly if it wishes to assign to an agency decisions of vast ‘economic and political significance’” [citations omitted].

In using a little-used 300-word provision of the Clean Air Act to redesign fundamentally the nation’s electricity markets, EPA has gone far beyond the bounds of the regulatory authority granted to it by Congress. It is no wonder, then, that CPP is facing substantial legal opposition, with lawsuits filed by 27 states, 24 national trade associations (including a coalition of 16 trade groups led by the U.S. Chamber), 37 rural electric cooperatives, 10 major companies, and three labor unions.

Remarkably, then, the vast bulk of the emission reductions the administration is counting under its Current Measures scenario will come from: (1) an increase in projected sequestration removals attributed to improved “data and modeling of emission trends in the LULUCF sector”; and (2) an EPA regulation that is in severe legal jeopardy. Hmmm. 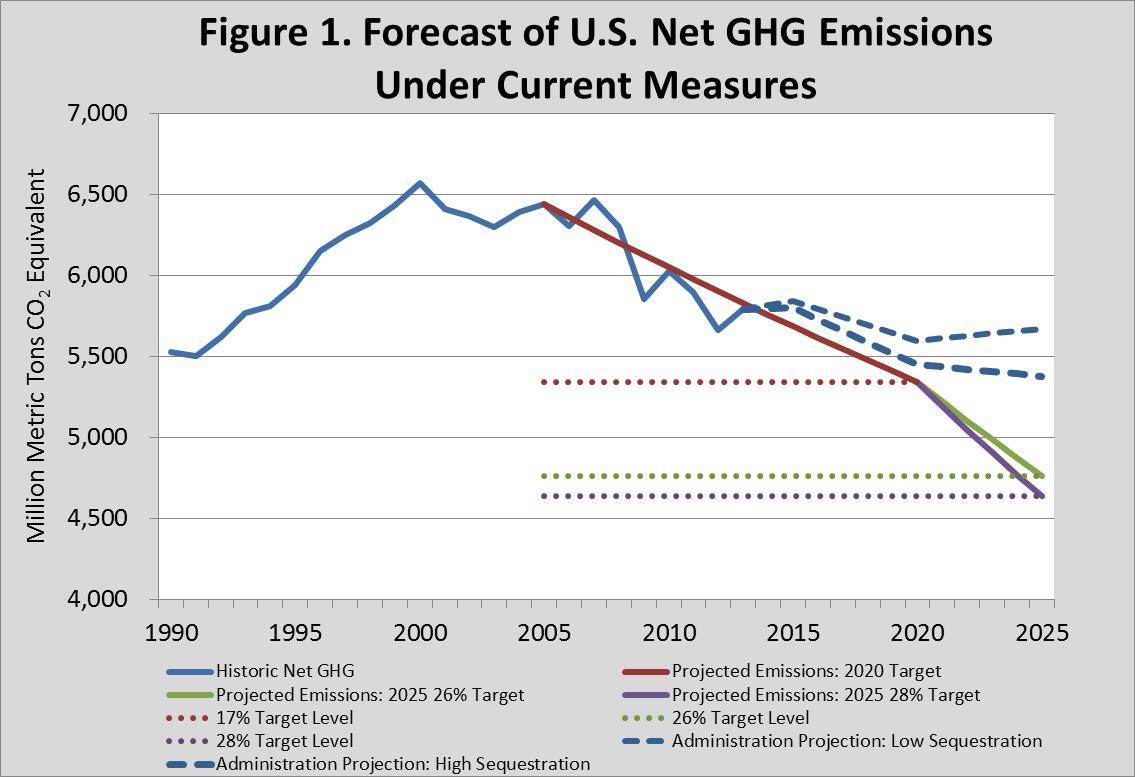 The 2016 Second Biennial Report also provides estimates of potential emissions reductions from prospective policies and programs in its Additional Measures scenario. The report provides no detailed proposals, but rather a list of general items, including “reductions in industrial energy demand in several subsectors.” This is marginally more than what the administration had to say about industrial emissions in its INDC—which was nothing.

It is hard to contemplate that the administration does not envisage getting at least some reductions from regulation of energy-intensive industrial sectors. Indeed, EPA’s fiscal year 2015 budget proposal notes the agency intends to begin considering new GHG regulations on the refining, pulp and paper, iron and steel, livestock, and cement sectors, tough this activity was not included in its fiscal year 2016 request. Nevertheless, reports from the American Council for Capital Formation and Inside EPA substantiate that the administration is laying the groundwork for regulating GHG emissions from the industrial sector.

When all is said and done, the administration still can’t figure out how to reach its goal without everything breaking just right—and with a few very big and very lucky adjustments along the way. 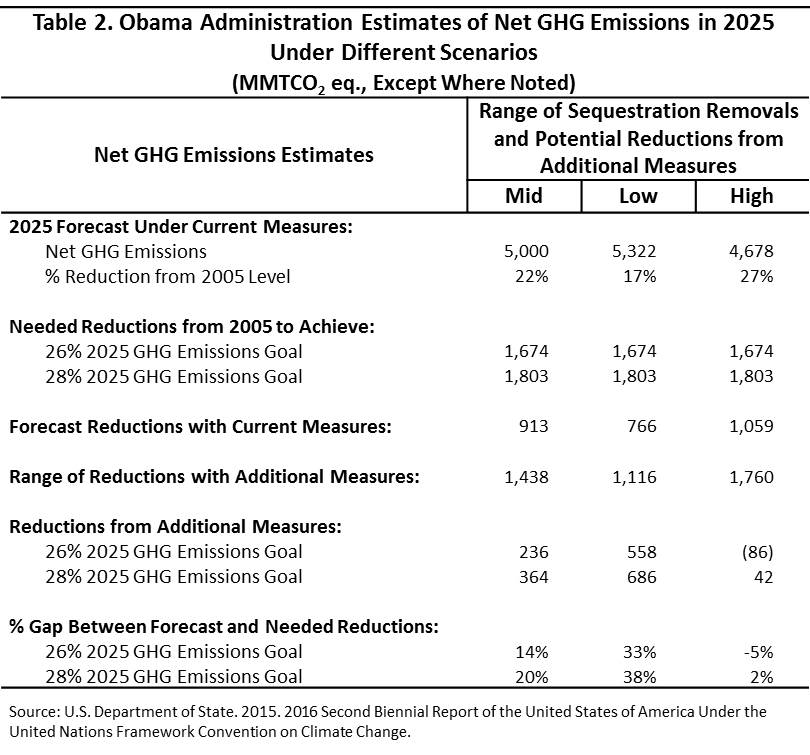