With oil and natural gas revenues comprising up to 40% of Russia’s federal budget, it became clear after its invasion of Ukraine that the U.S. and other countries must work to reduce purchases of oil, petroleum products, and natural gas from Russia. President Biden responded appropriately by imposing a ban on such purchases (in addition to coal) on March 8, concurrent with decisions by many private companies to self-sanction and halt energy development projects in Russia.

Of course, U.S. and global oil demand did not change after these announcements, so the U.S. must replace those Russian import volumes, which averaged 672,000 barrels per day in 2021. This has led to speculation that the Biden Administration could seek short-term relief through a number of suboptimal options, including by potentially relaxing sanctions on oil exporting countries such as Venezuela and Iran.

These developments highlight an unfortunate but longstanding reality in global energy markets: the world remains disproportionately dependent on authoritarian regimes to meet its energy needs. The U.S. Chamber of Commerce has quantitatively assessed these dependencies in its Index of Energy Security Risk, which summarizes data such as trends in energy production among countries of varying levels of freedom. For example, in 2021, 53% of global oil production occurred in countries designated as “not free” based on Freedom House’s annual assessment of political risk and civil liberties in countries around the world. 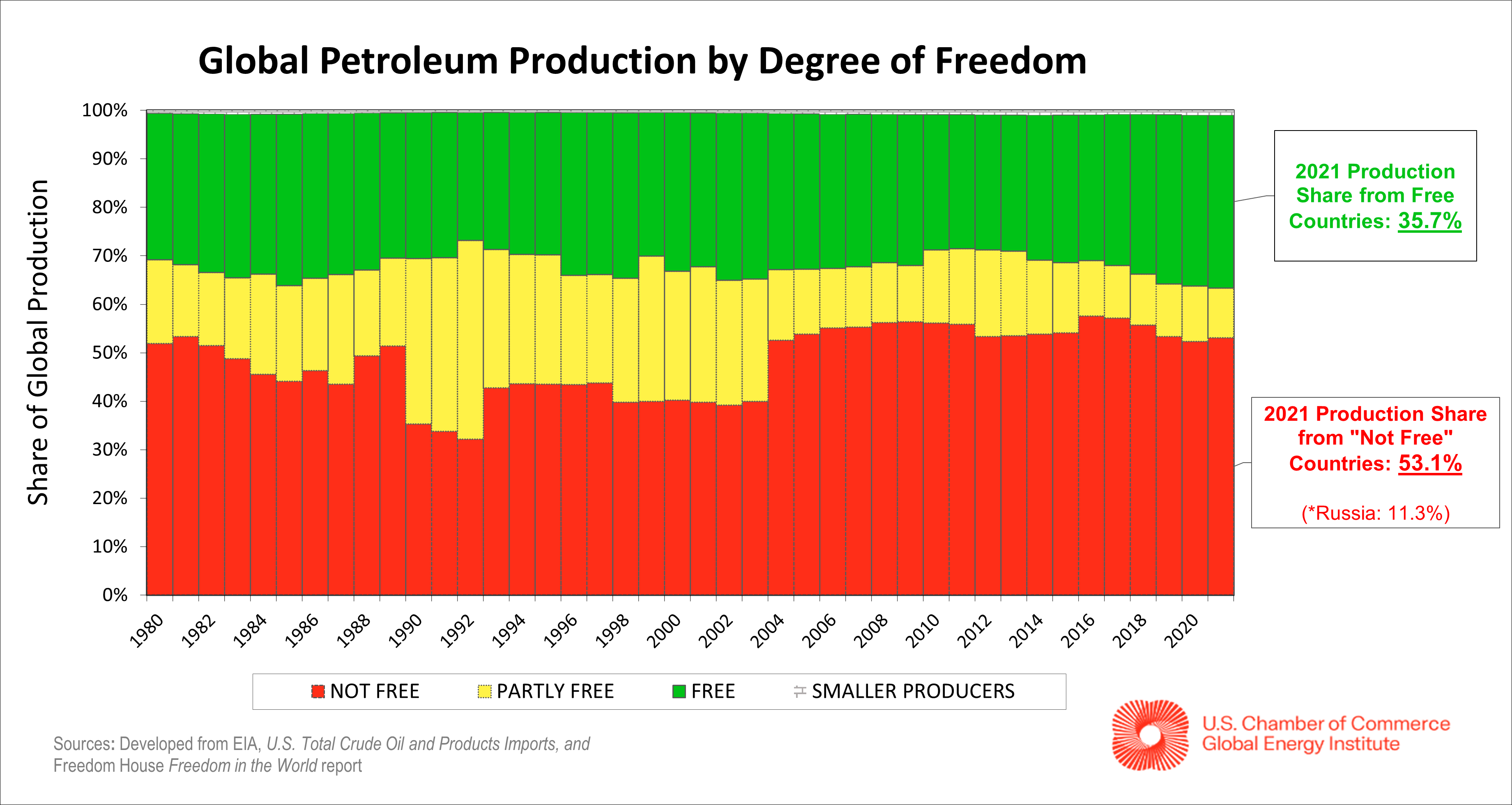 While free countries’ market share has increased slightly in recent years—thanks largely to the U.S.-powered shale revolution—it’s clear that the national security of freedom-loving nations will benefit greatly from further progress toward true energy independence. This requires an all-of-the-above approach built on two prongs: (1) working to develop robust alternatives that reduce oil and gas demand (such as energy efficiency, electric vehicles and expanded nuclear power and hydrogen, among many promising options); and (2) increasing domestic energy production.

It is here that a political divergence has arisen. Democrats and the Biden Administration argue that high gas prices and energy security concerns mean we should double down on clean energy investment, while Republicans are calling for reducing barriers to increase domestic energy production. But it’s obvious—at least to us—that this isn’t a binary choice, and that policymakers can and should work together on a legislative and regulatory agenda that does both.

There are positive signs that the debate is moving in this direction. Last week, the U.S. and European Commission released a strong joint statement on energy security, including a commitment to enhance cooperation on liquified natural gas supply diversification, renewables, hydrogen, and other clean energy technologies. Meanwhile, earlier this month Energy Secretary Jennifer Granholm traveled to Houston to “extend a hand of partnership” to the U.S. oil and gas industry, emphasizing that America is “on a war footing—an emergency…that means you producing more right now, where and if you can.”

We applaud these actions and were pleased to see DOE approve two long-pending applications to export LNG from existing facilities to countries we lack free trade agreements with—including all of Europe. But there is far more to be done. These actions should be followed with further policy changes that encourage greater capital investment in projects necessary for longer-term production growth. This should include reversing the administration’s ban on oil and gas leasing on federal lands and waters, as well as revisions to policies that discourage permitting for pipelines and a bevy of other energy-related projects.

It’s also important to recognize that encouraging responsible U.S. energy production can be a net positive for the environment. Because supply side policies that restrict domestic production do not reduce global energy demand, they do not lead to lower emissions. Instead, they simply shift production to foreign countries that typically have lower environmental standards. This creates the counterintuitive reality of production restrictions leading to higher emissions.

In fact, the National Ocean Industries Association has detailed how U.S. offshore production is an emissions asset, not a liability, citing a 2016 analysis by the Obama Administration determining that ending lease sales in the Gulf of Mexico would increase emissions: “U.S. GHG emissions would be higher if BOEM were to have no lease sales…Emissions from substitutions are higher due to exploration, development, production, and transportation of oil from international sources being more carbon intensive.” Moreover, according to Wood Mackenzie, offshore deepwater production carried out in areas such as the Gulf of Mexico has the lowest GHG emissions of all sources of oil in the world.

Recently released data from the International Energy Agency’s Global Methane Tracker supports this conclusion. As shown in the chart below, IEA estimates that the methane intensity of oil and gas production in Russia is 30 percent higher than in the United States. Emissions in Iran are 85% higher for each unit of energy produced, and Venezuela is off the charts at 652% higher. 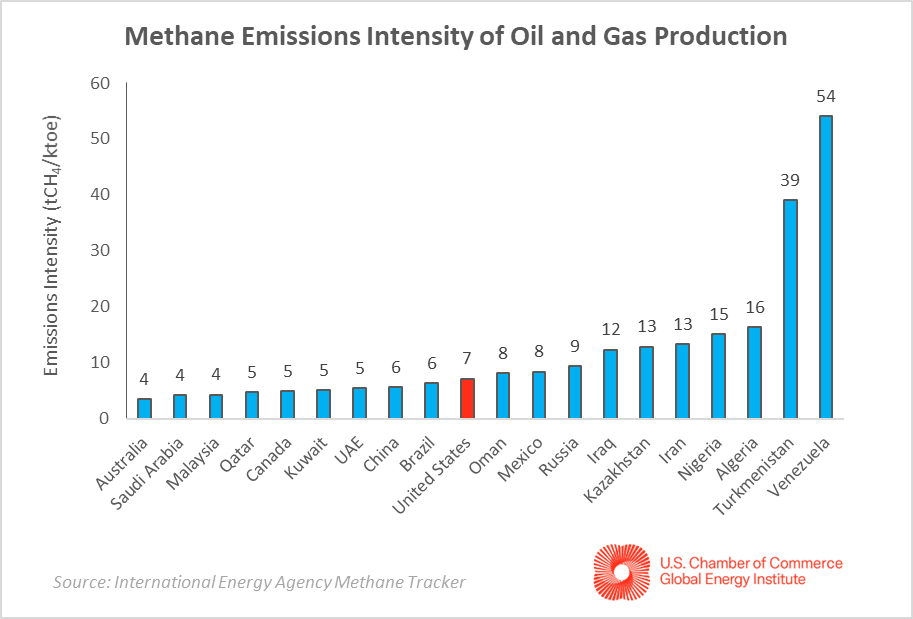 Therefore, a comprehensive approach to enhanced energy security through increased domestic production will not undermine climate goals. We know that free economies are clean economies, and we should therefore aggressively pursue low-carbon alternatives that wean U.S. dependence on fossil fuels, while also recognizing the climate and security benefits of relatively low-GHG energy production here on U.S. soil.