As this year’s United Nations climate change negotiations wind their way to a conclusion in Paris in December, there are still a lot of unanswered questions.

While much of the focus has been on the greenhouse gas (GHG) emission reduction targets included in the Intended Nationally Determined Contributions (INDC) submitted by governments to the UN, one question that lingers is what, if any, long-term emissions goal will be endorsed at the Paris meeting. The European Union is pushing a goal that would slash global GHG emissions to 60% below their 2010 level by 2050, a goal backed by other governments and many green groups.

Let’s take a quick look at what meeting “60-by-50” might entail. The Organization for Economic Co-operation and Development’s (OECD) Environmental Outlook to 2050 report shows that global GHG emissions in 2010 were 48.4 gigatons of carbon dioxide equivalents, which means that emissions in 2050 would have to be no more than 19.4 gigatons.

As the chart below shows, OECD also estimates that, if let unconstrained, GHG emissions would hit nearly 81 gigatons in 2050, with the vast majority of the growth coming from developing countries. (The Intergovernmental Panel on Climate Change 5th Assessment Report contains even larger estimates for unconstrained global emissions in 2050, but we’ll stick with the OECD numbers for this exercise.) 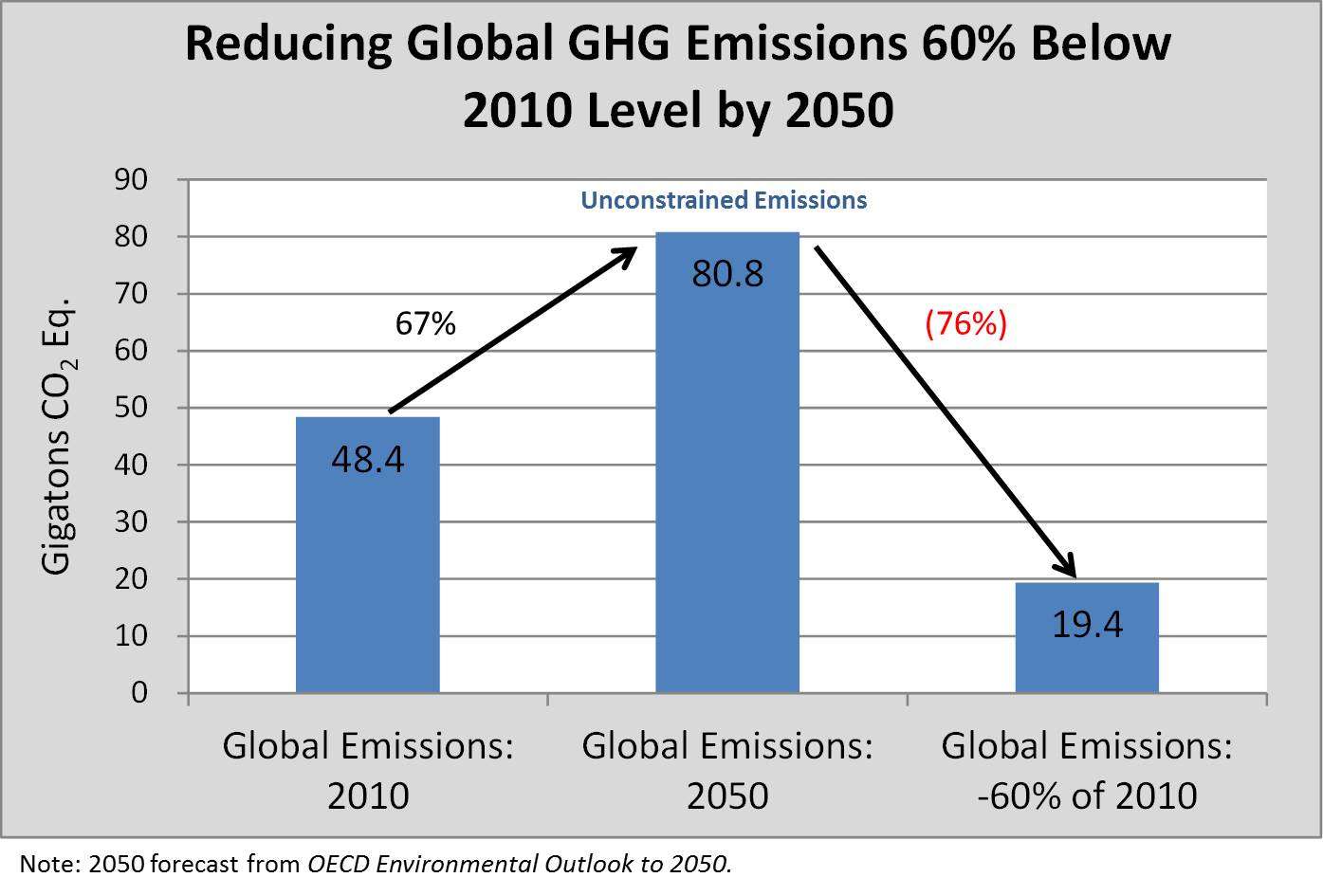 So reaching “60-by-50” is not as simple as just cutting 2010 emissions by 29 gigatons, which would be a huge task in and of itself. It also means avoiding more than 30 gigatons of future emissions, some of which have already happened. When combined, this is a staggering amount, equivalent to eliminating total U.S. GHG emissions every 3.8 years from now to 2050.

Then there’s the question of how to share the burden. Developing countries contend that as “Annex I” (i.e., developed) countries are responsible for most of the build-up of atmospheric GHGs, they should go first with deep emission cuts that amount to at least an 80% reduction by 2050—a goal the Obama Administration’s acknowledged in its INDC.

Cutting U.S. emissions 80% by 2050 would shrink the country’s “carbon footprint,” relative to its economy and population, to levels today seen only in poverty-stricken countries Haiti, Afghanistan, North Korea and Chad. It is hard to imagine how an energy-hungry, highly-developed country with a population projected to grow to more than 400 million people by 2050 could realistically cut emissions so drastically in such a short space of time.

Nevertheless, let’s assume all developed countries succeeded in cutting emissions by 80% in 2050. To meet a 60% global target, total emissions from developing countries, after rising sharply for decades, eventually would have to plunge well below their 2010 level by 2050 (see the chart nearby). What’s more, because developing countries will have much larger populations 35 years hence, their per capita emissions, about 5 tons in 2010, would have to be move well below their 2010 level, too.

Even more sobering is that these outcomes would not be materially different even if developed country emissions were “0” in 2050.

As a practical matter, this would mean that all of the increase in developing country energy supply in 2050 compared to 2010 would have to be zero-emitting - and then some. The reality is, of course, that these countries continue to build fossil fuel plants with abandon.

And who can blame them? Unless developed countries are willing to foot the bill, developing countries will never accept such emissions limits because of the devastating impacts it would have on their economic progress. They’ll carry on using affordable fossil fuels because they have an overriding interest in boosting growth and lifting their people out of poverty. Cutting GHG emissions will always take a backseat to these goals. 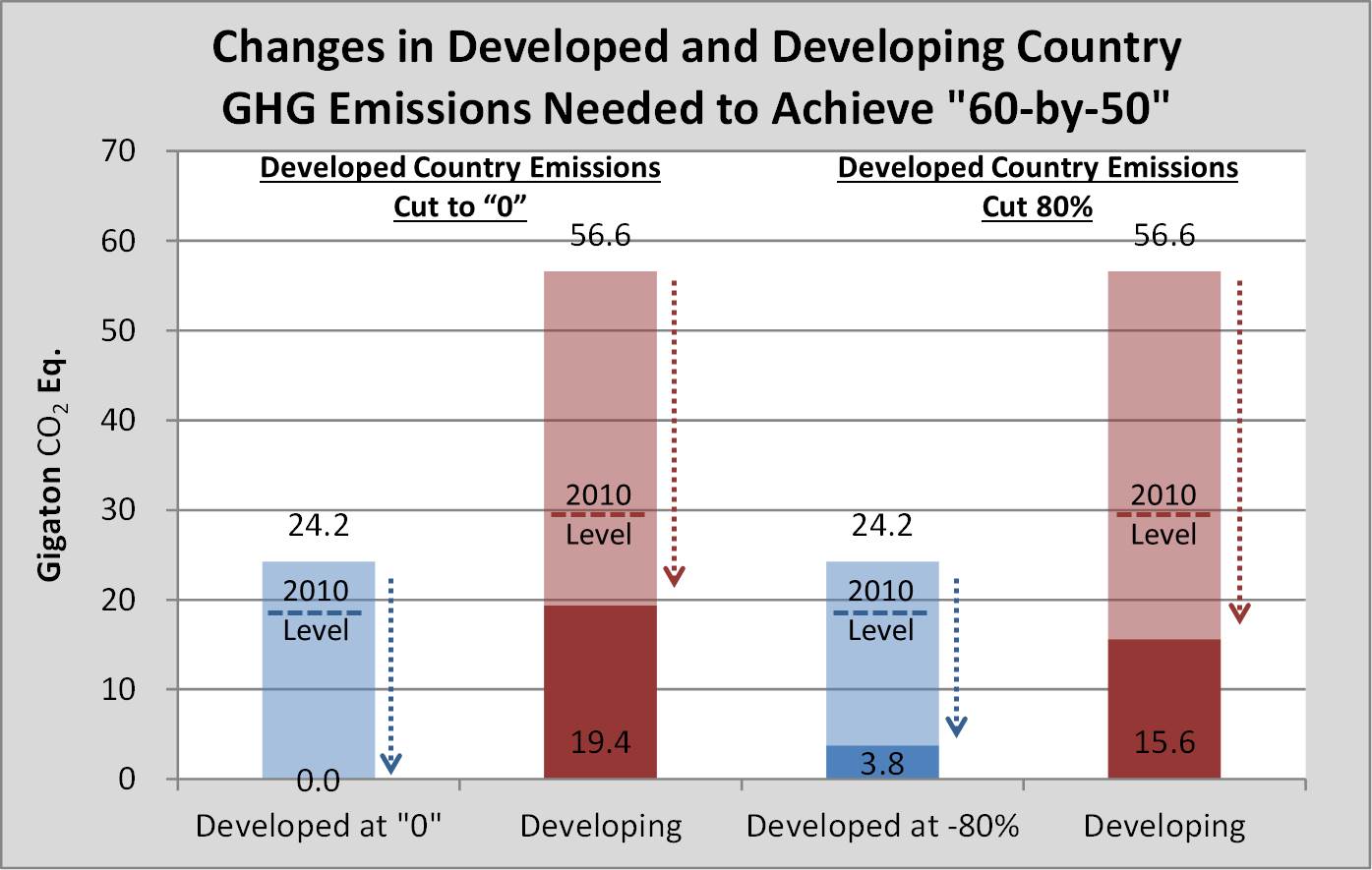