The Global Energy Institute is celebrating the 10th anniversary of its U.S. Index of Energy Security Risk. This momentous achievement aside, there is lots to celebrate when it comes to the current state of American energy security. For starters, the United States has achieved its fourth lowest risk score since 1970, a great accomplishment when one considers that it was at its record high just seven years earlier in 2011 (see the chart nearby).

We developed the Index to provide analysts, policymakers, and the public with a reliable tool to answer a simple question: Is U.S. energy security getting better or worse? The Index goes back to 1970 and uses 37 different measures of energy security risk. (As you look at the risk scores in the chart below, remember that it’s supposed to measure risk, so like a golf score, lower is better.) 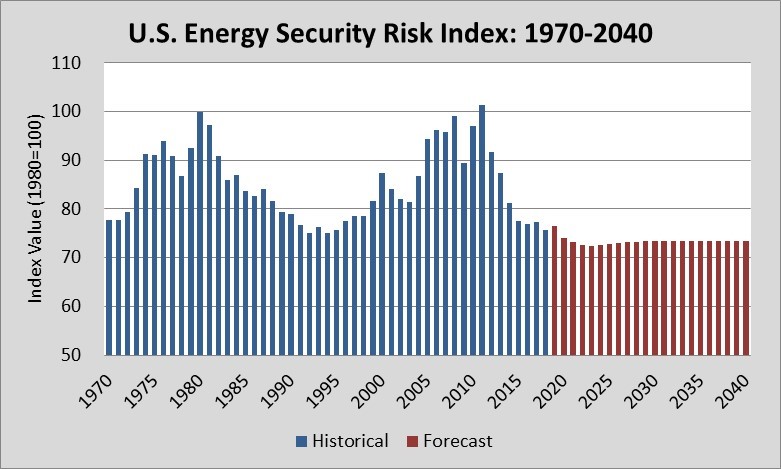 At its inception in 2010, the Index showed a dire predicament regarding energy security in the United States. From its most secure point in the mid-1990s, our Index showed energy security deteriorating, with total risk heading steadily higher through 2011, and every indication was that future risks would remain near the record high for decades. Indeed, back in 2010 we wrote: “Looking ahead, the outlook for U.S. energy security is not bright, with decades of risks comparable to those experienced in 1980 and 1981 and again in 2008. When realized, these risks exacted a heavy toll in geopolitical, economic, and human terms. The prospect of extended periods of comparable risk in the future is unsettling.”

Look how far we’ve come in 10 years, and how our view of the future has changed!

The Shale Revolution is to thank for that. The combination of hydraulic fracturing, horizontal drilling, and advanced seismic imaging of shale formations has made America the world’s largest oil and natural gas producer in the world, something unimaginable a decade ago. The U.S. is also among the largest producers of coal, renewables, and nuclear power generation, making us the world’s single largest energy producing country, by far.

Our energy security outlook is now much rosier, with future risks now expected to be lower than the record low risks we achieved in the mid-1990s. Such a forecast would have seemed completely unrealistic back in 2010.

The Index itself goes into much greater detail on these trends, but it’s sufficient to say that the energy revolution in the United States has had profound security, economic, and geopolitical impacts we still have not fully appreciated yet.

While we’ve been at this for 10 years, we’re not resting on our laurels. To keep up with the changing energy landscape, this year’s edition contains a special section called, “critical earth elements,” which are materials needed in a range on renewable and advanced technologies (i.e., cobalt, graphite, lithium, and rare earths).

These key elements have not always been as critical in our energy mix, but they are much more significant now and, if expectations are borne out, will gain even more importance in the future. Increased demand for these materials in the energy sector may lead to larger energy security risks. This 2019 edition of the Index includes an initial examination of how risks connected to these critical earth elements could be incorporated in future U.S. Indexes.

As GEI’s President and CEO Martin Durbin writes in his preface to the report, “GEI will continue to strive to keep the Index relevant in a rapidly changing energy market. Ten years from now, we hope the Index will be able to tell a story as compelling and encouraging as after the first 10 years.” Here’s to hoping.

@globalenergy
Some candidates have proposed a ban on #fracking. If they get their wish, Pennsylvania's #economy will suffer. Our latest Energy Accountability report takes a look at the real-world consequences of campaign promises aimed at banning fracking. Take a look: https://t.co/s3BtiEjsSD pic.twitter.com/Tup5y3YeXJ