The White House is certainly right to be concerned with pain at the pump. Average nationwide gas prices hit $3.17 per gallon earlier this month—a seven-year high that effectively acts as a tax on families and businesses, hampering economic recovery.

However, the Administration’s plea to OPEC+ is particularly puzzling in light of a string of federal actions it has taken to limit oil production from North American sources.

The President’s decision to block the Keystone XL Pipeline on his first day in office stands out as a glaring example. When fully operational, the pipeline was expected to deliver 830,000 barrels of Canadian oil per day to U.S. refineries. With those supplies cut off, the U.S. now finds itself more dependent on OPEC+ nations for its energy needs. As a result, Russia has now surpassed Mexico as the second-leading foreign oil supplier to the U.S., with most recent data showing imports of 844,000 barrels per day—nearly double the historical average and ironically only slightly more than the Keystone XL pipeline itself would have provided.

Meanwhile, the Biden Administration has suspended new oil and gas leasing on federal lands and waters, which accounts for 22% of total U.S. crude oil production, contributes $76 billion to the economy and supports over 300,000 American jobs. The U.S. Department of Energy has reduced its outlook for domestic production in 2022, in part because U.S. producers are limiting investment as a result of federal policies. All at a time when the Administration itself acknowledges we need more oil production. Does that make any sense?

Moreover, while the policies to curb domestic production over the past year have been driven by climate and environmental concerns, ramping down North American energy production while relying more on OPEC+ nations is actually counterproductive. For example, the developer of the Keystone XL pipeline pledged to make the project net zero carbon emissions by 2030, and here in the U.S., American producers continue to make progress reducing methane emissions. While more improvements are on the horizon, as shown in the chart below, the methane emissions intensity of energy production in the U.S. and Canada is already far superior than that of most OPEC+ nations, demonstrating that calls for increased foreign production at the expense of American energy are inadvisable from an environmental perspective as well.

The bottom line is that relying on North American energy to meet these challenges would be better for our economy and our environment, yet the Biden Administration is choosing the opposite path. Our Senior Vice President Christopher Guith sums it up, “The call for increased OPEC+ oil production demonstrates the fallacy of the White House federal lands energy ban. Let the U.S. produce oil under the world’s strictest environmental standards and boost our energy security and economy instead of Russia’s and the Middle East.” 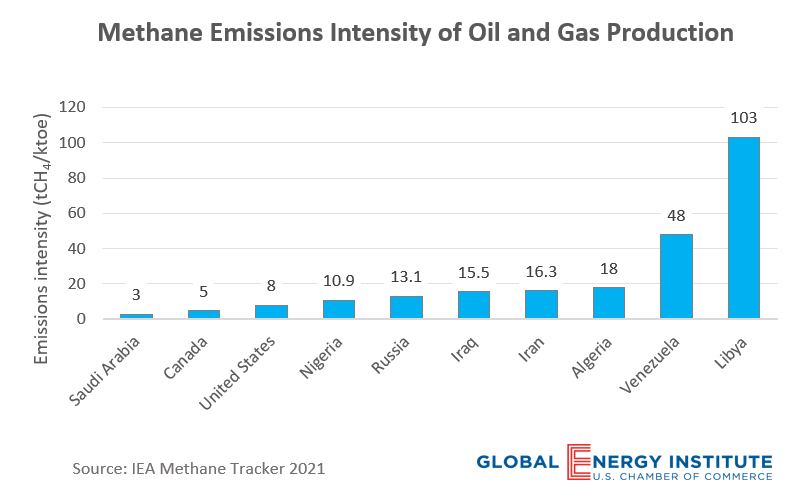 American #energy is better for our #economy and our #environment, yet the Biden Administration is choosing the opposite path with its recent request of #OPEC+ to ramp up production. Learn why the best solution to pain at the pump is here in America.