Many countries will be signing the Paris Agreement on climate change this Earth Day. The overall aspirational goal of the agreement is as follows:

The addition of the 1.5°C stretch goal is something new for the Parties to the United Nations Framework Convention on Climate Change (UNFCCC), who in decisions since Copenhagen in 2009 have stuck included the 2°C goal only. We have already examined the implications of the 2°C goal—which many, but by no means all, people equate with a 40% to 70% cut in global greenhouse gas (GHG) emissions by 2050 compared to 2010—in an earlier analysis posted well before the Paris Agreement was negotiated, and showed how completely unrealistic it is.

So what would it take to put global emissions on a pathway to achieve the 1.5°C goal? The fact is, no one really knows, if it is even knowable, what a 1.5°C global emissions trajectory would look like. Conventional wisdom holds that would be consistent with a 70% to 95% reduction in global greenhouse gas emissions by 2050 from the level in 2010, and drafts of the Paris Agreement included text in the consistent with this range. At the end of the day, however, this language was not adopted in the final text of the agreement.

Indeed, despite many opportunities to do so, the Parties to the UNFCCC have never been able to agree on what the 2°C or 1.5°C temperature targets actually mean in terms of either a global greenhouse gas emissions trajectory or an atmospheric GHG concentration. It isn’t hard to see why a proposal for a 70% to 95% reduction in global emissions, much less a 40% to 70% reduction, has not been met with success. Developing countries have never agreed to cuts of this magnitude and are exceedingly unlikely to do so anytime soon. A quick look at the data shows why.

For the sake of this post, let’s take the midpoint of the 70% to 95% range and posit a global emissions cut of 83% below the 2010 level. Like in our previous post, we’ll also use the same Organization for Economic Co-operation and Development’s (OECD) estimates for global GHG emissions in 2010 and for unconstrained emissions in 2050 of 48.4 gigatons [a gigaton is one billion metric tons] of carbon dioxide equivalents and 80.8 gigatons, respectively. (The Intergovernmental Panel on Climate Change 5th Assessment Report contains even larger estimates for unconstrained global emissions in 2050, but we’ll stick with the OECD numbers for this exercise.)

As the chart nearby shows, reducing global emissions by 83% would leave 2050 emissions at a paltry 8.2 gigatons. As you can see, getting to 8.2 gigatons would not require merely cutting current emissions, it also would require avoiding very large volumes of future emissions.

In total, then, reaching an “83-by-50” goal would require cutting or avoiding emissions roughly equal to total net emissions from the United States in 2010 every three years for the next 35 years.

As implausible as it is, let’s assume, however, that all developed countries beat even that far-fetched goal and completely eliminated emissions to “0” by 2050. What would developing countries have to do? Plenty.

Also remember that by 2050, the world will have added another 2.5 billion people or so, most in the developing world. Under this 83-by-50 scenario, then, emissions per capita in developing countries would drop from about 5.3 tons per person in 2010 to just 1.0 ton in 2050.

As a practical matter, all of this would mean that if you took a snapshot of the world in 2050 and compared it to a snapshot taken in 2010:

And if that’s not enough, later in the century, global emissions would have to be net negative, meaning that we would move beyond carbon neutrality to actually removing carbon from the atmosphere.

If you think all of this sounds fantastically unrealistic, join the club.

Developing countries will never accept such limits on their growth. That is, unless developed countries are willing to foot the bill, which would run into the multiple trillions of dollars.

Instead, China, India, South East Asia, South Africa, and others will carry on using affordable and scalable fossil fuels because they have an overriding interest in boosting growth, increasing energy access, and eradicating poverty. Cutting greenhouse gas emissions will always take a backseat to these goals.

Indeed, we’ve estimated that today nearly 1.2 trillion watts of new coal-fired power plants are under construction or in the planning phase worldwide. That’s about 3.5 times the capacity of the entire U.S. coal fleet. A carbon-constrained world this is not.

Most every delegation sitting around the UN negotiating table understands the implications of  these numbers—that it’s one thing to achieve 83-by-50 in a computer model, quite another in the real world. It’s more than likely, therefore, that the temperature targets in the Paris Agreement will remain what it’s always been—potent political aspirations of little real-world consequence. 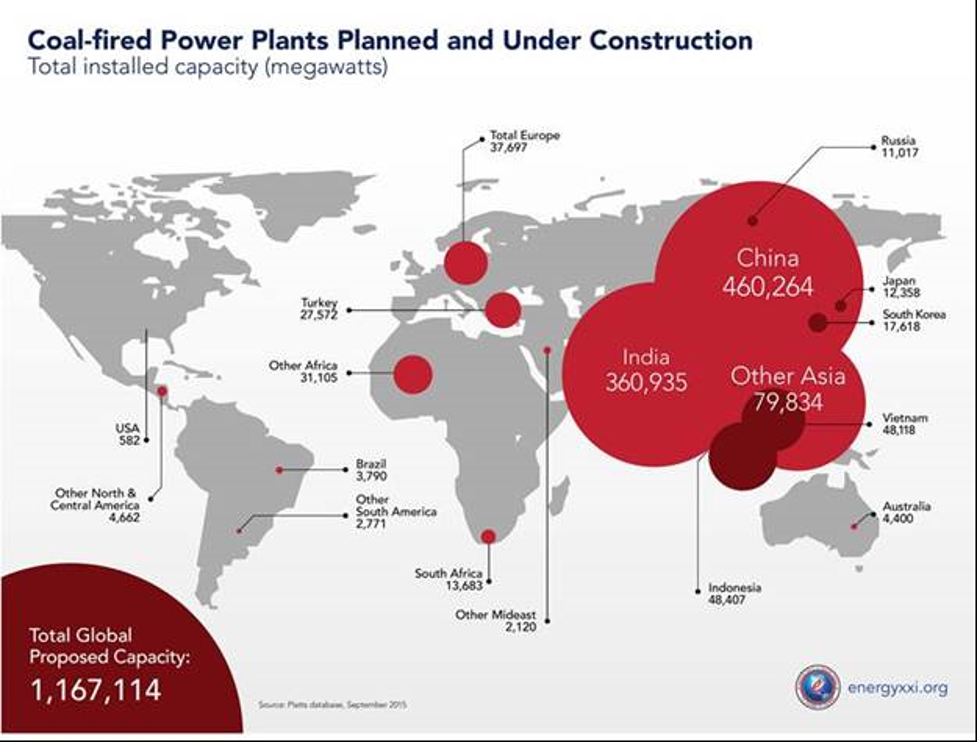