Trump and Coal: Don’t Call it a Comeback, but Regulatory Relief Matters Immensely

Among the countless issues and storylines that drove the historic 2016 presidential election, few if any drew a more striking contrast than the Trump and Clinton campaigns’ respective approach to energy policy, and coal in particular. Mrs. Clinton promised to continue President Obama’s aggressive regulatory agenda that has devastated coal, and sparked the wrath of Appalachia with her promise/gaffe to “put a lot of coal miners and coal companies out of business.” By contrast, President-elect Trump embraced coal country and vice-versa, promising to end the War on Coal and put miners back to work.  Not surprisingly, some of his largest margins of victory ended up coming from coal-heavy states.

In the short time since Trump’s surprise win,  an endless cavalcade of news and opinion pieces have thrown cold water on the President-elect’s coal promises. The headlines alone tell most of the story:

The narrative advanced in these articles is as transparent as it is repetitive: coal is doomed with or without a Trump presidency, and the President-elect’s campaign message of hope for struggling miners overstated his ability to help and may have even misled them.

Given the sheer volume of attention to this issue, it makes sense to carefully unpack these claims and see how they match up with our best public data and official government forecasts.

First of all, there is a consensus, if not unanimous agreement, that the rise of competition from low-cost natural gas will prevent coal from returning to its erstwhile status as the dominant provider of electricity in the U.S. The massive supplies of natural gas enabled by the shale revolution have realigned markets for the foreseeable future, and it is difficult to envision a return to the mid-2000s when coal provided more than 50% of electricity nationwide (it now stands at 32%). (NOTE: this does not mean that natural gas is the primary driver of coal’s recent declines. That honor belongs to EPA, as we have repeatedly documented here and elsewhere.)

So was Mr. Trump’s warning to miners at a rally in West Virginia to “Get ready, because you’re going to be working your asses off” a bit over the top? Probably. Does that mean the media’s gleeful suggestion that a Trump presidency therefore does not matter to the future of coal country is accurate? Absolutely not.

Why?  Because even if Trump’s ability to help create new coal jobs is limited, the odds are high that he can help save most of the 535,000 coal mining-related jobs that remain.

The clearest illustration of this comes from the Obama Administration’s own Department of Energy forecasts. The most recent Annual Energy Outlook (AEO) from DOE’s Energy Information Administration (EIA) provides detailed projections of energy markets under two scenarios: one in which EPA’s Clean Power Plan electricity regulations are implemented, and one in which they are not. These scenarios provide a good proxy for life under potential Hillary Clinton and Donald Trump presidencies, since their respective campaigns supported and opposed the rule.

When it comes to coal, EIA’s CPP and No-CPP forecasts are night and day. Under the CPP, EIA forecasts electricity sector coal use to plummet sharply—about 30% between 2020 and 2030 (see graphic). Without the CPP, coal generation stays flat, and even increases slightly through the first half of the 2020s. 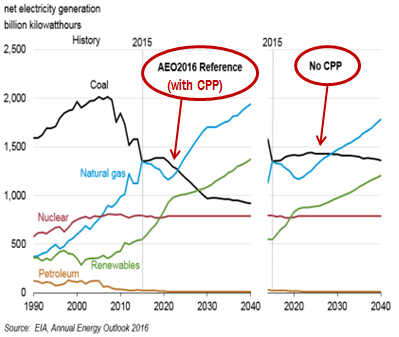 Not surprisingly,EIA’s outlook for coal mining mirrors that of electricity generation. Without CPP, coal production stays flat and even increases modestly through 2030. But if the rule were to be implemented as Mrs. Clinton promised, production would plummet over 27% lower by 2030. (Note: additional EIA data project that a withdrawal of CPP will benefit the coal-producing regions of the Western and Interior U.S. the most, but even in Appalachia, production is projected to be 23 percent higher without the CPP than with it). 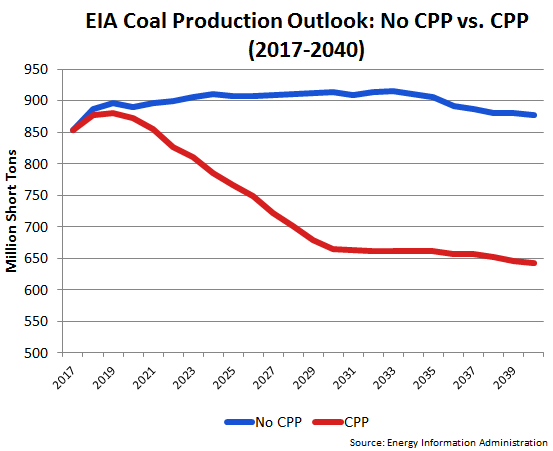 EIA’s modeling makes it clear that there is no question that President-elect Trump’s commitment to scrap the CPP and end the War on Coal will save millions of tons of coal production, and in doing so, save the jobs of many miners (while helping to keep electricity  affordable).

Importantly, this is only one regulation. A multitude of other job-killing rules are likely to be repealed or reformed as well, thereby providing an additional boost to coal’s prospects. And while more of a wild-card, Trump’s commitment to prioritizing economic growth, if successful, could also provide significant relief. If infrastructure, tax, regulatory, and other initiatives can help the U.S. economy escape this seemingly endless period of sub-two percent growth, demand for electricity—and coal—will also see a boost. This could be particularly important to Appalachia, where metallurgical coal for steel-making comprises nearly 30% of overall production.

The bottom line?  Trump’s victory may not result in a comeback for coal, but his efforts to halt EPA’s crushing regulatory agenda should save countless coal jobs and ensure that coal continues to bolster the American economy with affordable, reliable energy.

@globalenergy
Did you know that many of the key technologies necessary for #decarbonization—such as solar panels, wind turbines and batteries—require large quantities of certain critical minerals? Join our #EnergyInnovates discussion on 6/24 to learn more. Register now! https://t.co/gcH0cDStjF pic.twitter.com/whVJqvVOuF