In recent testimony before Congress, the Energy Institute’s Karen Harbert took the Obama Administration to task for failing to explain how the country was supposed to meet the greenhouse gas emissions goal outlined in the Intended Nationally Determined Contribution—or INDC—it submitted to the United Nations. It looks like others are beginning to catch on.

The INDC will form the basis of the U.S. commitment under a new UN climate treaty to be worked out in Paris later this year. In it, the administration pledges that the United States will slash its net greenhouse gas emissions at least 26%, and aim for 28%, below the 2005 level by 2025. (Net emissions include “sinks,” that is, withdrawals of carbon dioxide from the atmosphere by forests.)

Not only is this goal completely unrealistic, jeopardizing our energy advantage with potentially ruinous consequences for the economy and employment. The administration also has failed to tally how the programs mentioned, however briefly, in its INDC will achieve it. And little wonder, because once you crunch the numbers, it’s clear they don’t add up, leaving nearly one-third of the president’s total goal unexplained.

In evaluating the administration’s INDC 28% goal, we used the Energy Information Administration’s Annual Energy Outlook 2015, EIA’s Analysis of the Impacts of the Clean Power Plan, the Environmental Protections Agency’s (EPA) U.S. Greenhouse Gas Inventory Report: 1990-2013, EPA's Regulatory Impact Analysis for the Clean Power Plan Final Rule, the U.S. Climate Action Reports 2014 (CAR 2014), government fact sheets and Federal Register notices, and other sources to calculate a baseline estimate of future greenhouse gas emissions and estimates for reduction that could be reasonably expected from announced programs. This analysis supposes, or course, that all of these policies, including those that have been bruited but not formally proposed yet, are implemented in a timely manner and survive political and legal challenges—a dubious proposition in the case of the Environmental Protection Agency’s Clean Power Plan. 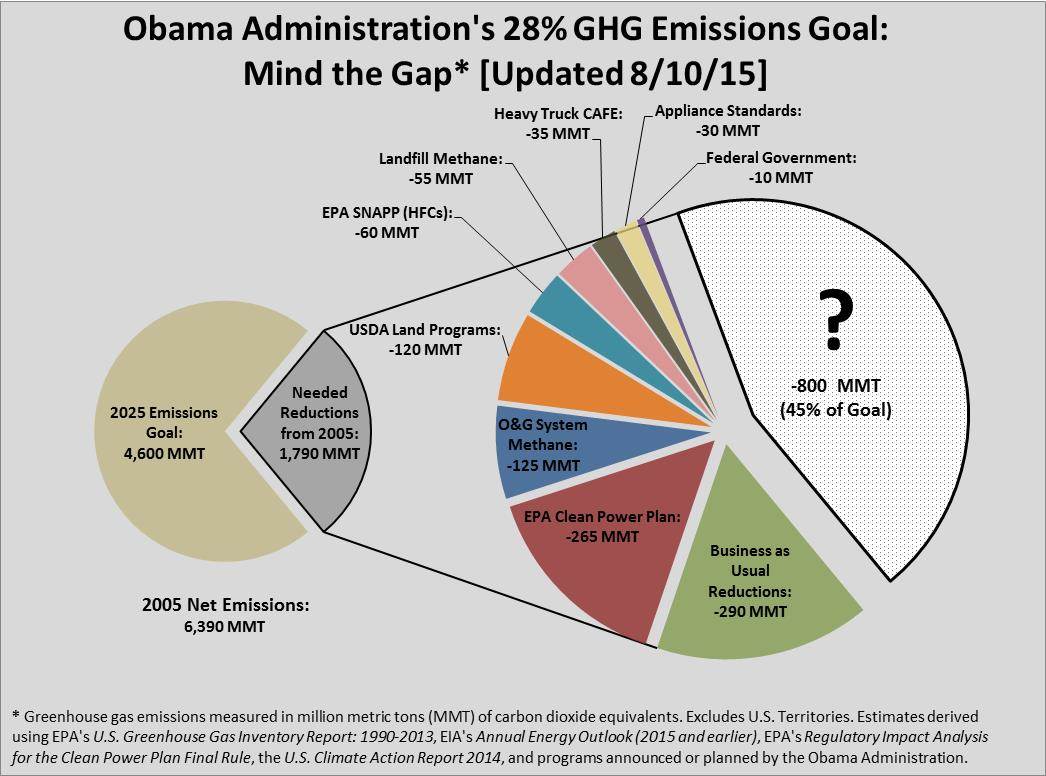 Based on our analysis, we estimate that in 2025, without further administration policies, net emissions would be around 6,100 MMTCO2, about 290 MMTCO2 lower than the 2005 level. This is a much larger contribution from Business as Usual that owes much to EPA’s revised Clean Power plan baseline forecast, which includes a larger role for renewables power and energy efficiency in the power sector than in EIA’s AEO 2015. Achieving the 28% goal would still require a whopping 1,500 MMTCO2 left to achieve the 28% goal.

As the accompanying chart shows, new rules and programs the administration has announced or has planned could lead to a further 700 MMTCO2 of reductions in 2025 for a total reduction of (290 + 700 =) 990 MMTCO2.

Here’s how we arrived at the 700 MMTCO2 figure:

Even with these fairly generous estimates, these measures, which include some programs that haven’t even been announced yet, would fall about 800 MMTCO2, or 45%, short of the president’s goal. How does administration intend to plug the remaining gap? It hasn’t said. When asked by the Financial Times about the holes in the administration’s INDC, White House official Rick Duke chose to deny existence of a problem and instead change the subject: “Our numbers are quite clear. It’s other countries where we see more opportunities to clarify what the plans are.”

EPA’s fiscal year 2015 budget request, however, provides a clue. It says the Agency will soon begin considering greenhouse gas regulations on the refining, pulp and paper, iron and steel, livestock, and cement sectors. So we can expect the industrial sector will almost certainly be on the hook for reductions, even though there is no reference at all to industrial emissions in the INDC. Still, seeing as the entire industrial sector emitted a little over 800 MMTCO2 in 2013, even very steep cuts by industry won’t deliver nearly what’s needed. Where the administration goes next is anyone’s guess.

In addition, the World Resources Institute, an advocate for aggressive climate regulations, issued a report that came to the same conclusion we have: reductions from announced programs and policies would fall far short of the administration’s 28% international commitment.  WRI came up with its own regulatory wish list for reaching the president’s goal, which unsurprisingly includes new regulations on industrial and other sectors not now under EPA’s thumb and even more aggressive targets for already regulated sectors like electricity.

At any event, nearly four months after the INDC was released, we know no more about how the administration expects to meet its 28% goal than we did then. Todd Stern, the president’s chief climate negotiator, said that each nation’s INDCs should be structured so that its proposed actions “can be readily understood and analyzed.” It would be nice if the administration adhered to its own modest standard of transparency.

In the meantime, mind the gap.