How Much Should Nothing Cost?

$2 billion is  the state of Texas’ compliance cost for a recently finalized regional haze mandate that EPA admits has imperceptible benefits.   That’s one of the reasons why the U.S. Chamber was pleased to recently join the Texas Association of Business and 23 other state business groups in formal support of a lawsuit to block the costly rules.

Fortunately, last weekthe U.S. Court of Appeals for the Fifth Circuit issued an order staying the EPA’s implementation of the rule for Texas and concluding that the case has a “strong likelihood” of success on the merits. This is a major victory that not only protects states in the 5th Circuit (Texas, Louisiana, and Mississippi), but also holds promise for other states impacted by these onerous rules.

Before we explain why this is so important, a bit of background is in order. Regional haze is somewhat unique among EPA’s regulatory authorities, because its purpose is not to protect public health or the environment, but rather to improve aesthetics. In the 1970s, Congress authorized EPA to develop regulations aimed at reducing visibility impairment in areas such as national parks. This was a worthy and appropriate charge, particularly during a time in which haze was a significant problem in numerous parts of the country. But as with seemingly every authority granted to EPA, when given an inch, it takes a mile.

Despite the fact that Congress delegated implementation authority for these rules to states—an arrangement that worked well for nearly 40 years—the Obama Administration’s EPA has rejected this cooperative framework and moved to impose regulatory takeovers of regional haze programs in 15 states. Such actions—known as Federal Implementation Plans, or FIPs—are the “nuclear option” of the Clean Air Act. Originally meant to be a last resort, EPA now views FIP authority as a handy tool to solve disagreements with states through force instead of collaboration.

To add injury to insult, EPA’s regional haze FIPs are far more costly than the original state efforts, yet none of them actually deliver visibility benefits. At a recent House Science Committee hearing on the rule, Yeatman nicely summarized the absurdity of these takeovers:

EPA uses a metric known as a “deciview” to measure visibility improvement…According to peer-reviewed research, it would require an improvement of five to ten deciviews in order for the average person to perceive the difference in visibility with certainty, depending on conditions. With this referent in mind, consider the fact that in December of 2015, the EPA imposed a federal plan on Texas that would entail almost $2 billion in compliance costs in order to achieve a maximum visibility benefit of about .5 deciviews. [Emphasis added.]

Keep in mind—the entire purpose of regional haze rules is aesthetic improvement—there is no public health objective. So why would EPA insist on $2 billion of compliance measures that result in aesthetic “benefits” completely imperceptible to the average person?

The answer is simple: to expand the agency’s power over states and advance the War on Coal. In Texas, EPA’s FIP would force sulfur dioxide scrubber installations and upgrade at 7 different power plants in the state. These installations cost several hundred million dollars each, and force utilities to make difficult decisions to install the equipment or prematurely shut down their plants. In either case, the costs of EPA’s diktat will be borne by the citizens of Texas, in the form of higher electricity rates and lost jobs.

To illustrate EPA’s expensive pursuit of nothing, a few years ago the Chamber’s regulatory affairs division commissioned an analysis that employed imaging software to compare the benefits of EPA regional haze plans with those developed by the states. Below is the anticipated visibility improvement in Oklahoma’s Wichita Mountains resulting from EPA’s $282 million FIP for the state. 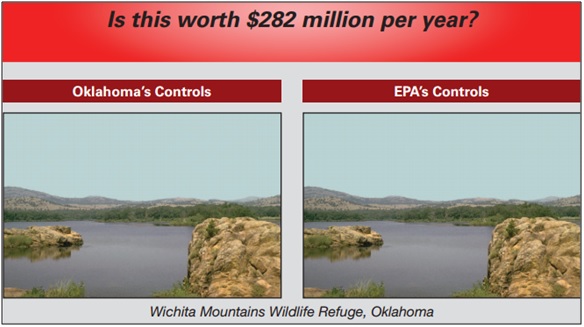 Don’t hurt your eyes looking for a better view under EPA’s view: you won’t find it. But you will find higher energy bills. The Industrial Energy Consumers of Oklahoma estimate that electricity rate increases from EPA’s regional haze takeover of their state will be 11-12 percent higher than they would have been under the Oklahoma-developed plan.

Again, clean air and clear skies are worthy environmental policy goals with overwhelming public support. But that’s a hefty price for nothing.

Fortunately, it ain’t over until it’s over, and the decision by the 5th Circuit staying this regulation until it can be reviewed on the merits will—at least for now—protect energy consumers from the heavy hand of the EPA.

@globalenergy
"Rather than unlocking more domestic #energy, this bill would effectively impose price controls that would discourage new energy production, resulting in even less supply while demand continues to increase. This will result in rationing and #gas lines." https://t.co/hS0FVQLFHe