The Environmental Protection Agency (EPA) hasn’t been shy about touting the alleged economic and environmental benefits of its proposed Clean Power Plan. But a recent analysis just released by the Energy Information Administration (EIA), the statistical arm of the Department of Energy, tells a very different story.

How else to explain EPA’s lukewarm endorsement of EIA s Analysis of the Impacts of the Clean Power Plan? The Agency’s spokeswoman, Liz Purchia, said the agency “appreciated” EIA’s efforts, even though, well the analysis wasn’t comprehensive; it didn’t model the final rule; it didn’t do a complete cost-benefit analysis; and it was unable to assess reliability.

Other than that, EPA really liked it, so much so that it “looks forward to continuing the conversation with DOE, and with [the Federal Energy Regulatory Commission], as we work to finalize and implement the Clean Power Plan." One gets the sense EPA wants this to be strictly a one-sided conversation, so the last thing it needs is an independent assessment of the kind EIA just delivered. A review of EIA’s results reveals that EPA has reason to be nervous.

Under its Clean Power Plan, EPA intends to regulate carbon dioxide emissions from exiting fossil fuel-fired electricity generating stations from 2020 to 2030 using authorities the Agency is claiming under section 111(d) of the Clean Air Act—authorities it actually may not have. At the request of House of Representatives Science Committee Chairman Lamar Smith, EIA was tasked with using its tried and true National Energy Modeling System to analyze EPA’s proposal. The “Base Policy” scenario EIA designed hews closely to the Clean Power Plan, including interim goals and compliance around EPA’s four building blocks:

There’s a lot very interesting results in EIA model runs, but for this analysis we’re just going to the focus on the economic and climate costs and benefits of EPA’s regulatory scheme by comparing the EIA’s Base Policy scenario against its Reference, or “business as usual,” scenario. (Key results discussed below are summarized in Table 1.)

Let’s start with carbon dioxide emissions. Under its Base Policy scenario—which covers only carbon dioxide emissions from fossil fuel combustion, not total greenhouse gases—EIA forecasts that U.S. power sector carbon dioxide emission would plunge below the Reference baseline by 14% in 2020 and 28% in 2025 before settling in at about 27% in 2030. Small cuts also are recorded for other sectors of the economy, bringing total reduction over the compliance period to nearly 6.2 gigatons CO2 lower than EIA’s baseline, or an average of about 561 million metric tons each year.

EIA data show that cutting emissions so rapidly and deeply would come at a tremendous economic cost, both in total and in a relation to each ton of carbon dioxide reduced. (For this discussion, all dollar figures are in 2014 dollars.) When compared against EIA’s baseline Reference scenario, cumulative economic costs over the Clean Power Plan’s 2020 to 2030 compliance period are an estimated $1.23 trillion in lost GDP, with a peak annual loss of $159 billion in 2025 (Figure 1). This amounts to an average annual GDP hit over the compliance period of $112 billion. 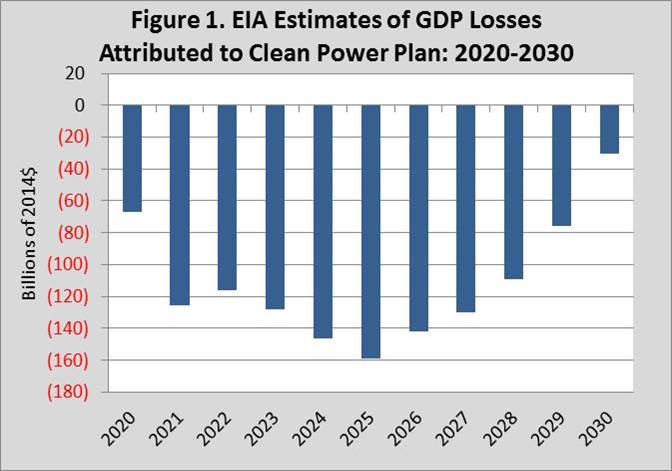 It’s often argued, however, that the value of the carbon dioxide emission reductions, as measured by the Social Cost of Carbon (SCC), would turn even such ugly losses as these into gains. The SCC represents an attempt to measure the health, property, agricultural, ecosystem, and other supposed impacts of emitting a ton of carbon dioxide. If the SCC is valued at, say, $48 for the year 2020, a 10 ton increase in carbon dioxide emissions during that year would yield a social cost of $480 while a 10 ton decrease would yield a social benefit of $480.

It’s also important to note that because greenhouse gases are well mixed in the atmosphere, these impacts are considered to be global in nature (unlike air pollutants, whose impacts largely are local). This means the climate costs or benefits would be felt primarily outside of the United States.

Whether it is even possible to measure the SCC with any precision remains a matter of no little controversy. Nevertheless, the president’s Council of Economic Advisors asserts that the estimating the SCC is a “critical step in formulating policy responses to climate change,” and further that it “provides a benchmark that policymakers and the public can use to assess the net benefits of emissions reductions stemming from a proposed policy.”

The chart in Figure 2 shows the economic cost per ton of carbon dioxide calculated for each year through 2030 (blue bars) and the administration’s Global SCC estimate for that year (red bars). The first thing that jumps out is how high the per-ton costs of decreasing carbon dioxide emissions under EPA’s plan really are. From 2020 to 2030, EIA estimates it will cost an average of $199 in lost economic growth for each ton of carbon dioxide reduced, reaching an extraordinarily high value of $316 per ton in 2021.

Now let’s turn to the benefits side of the ledger and compare these per-ton cost figures to the administration’s Global SCC estimates. To produce a net benefit, the SCC must be greater than the economic cost per ton of reduction. As the chart in Figure 2 shows, that’s certainly not the case here. Over the compliance period, the average per-ton economic loss is a stunning 3.7 times bigger than the SCC benefit. 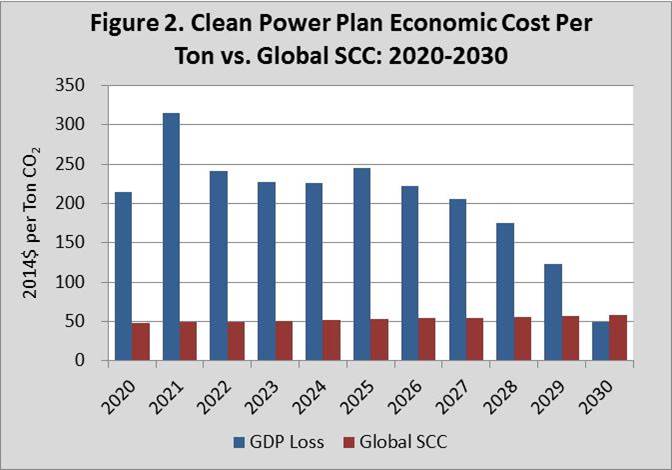 Even once these SCC benefit estimates, contentious as they are, are taken into account, there still remains a huge net cumulative economic loss of $899 billion, with an average annual net loss of $83 billion. (Applying the other SCC estimates developed by the Interagency Working Group also leads in each case to a net economic loss over the compliance period.) This translates into a net economic cost per ton of carbon dioxide reduction of $146.

It was observed earlier that most of the claimed climate benefits from decreasing emissions would occur beyond U.S. borders, meaning the SCC benefits claimed for the United States must be lower than the Global SCC.

Although the Interagency Working Group tasked with developing the SCC baulked at creating a “domestic SCC” (for reasons that are not entirely clear), it did note in its 2010 report that after apportioning the benefits globally, the domestic SCC would be a small fraction of the Global SCC, concluding: “[W]ith a 2.5 or 3 percent discount rate, the U.S. benefit is about 7-10 percent of the global benefit, on average, across the scenarios analyzed.  Alternatively, if the fraction of GDP lost due to climate change is assumed to be similar across countries, the domestic benefit would be proportional to the U.S. share of global GDP.”

The green bars in Figure 3 below show what the Global SCC looks like after it has been adjusted using the GDP-share method, which clearly is more charitable to EPA’s case. To calculate GDP share, we used the Department of Agriculture’s international macroeconomic data set of projected global GDP by country. The results are a Domestic SCC falling within a range of about $10 to $12 per ton over 2020 to 2030. 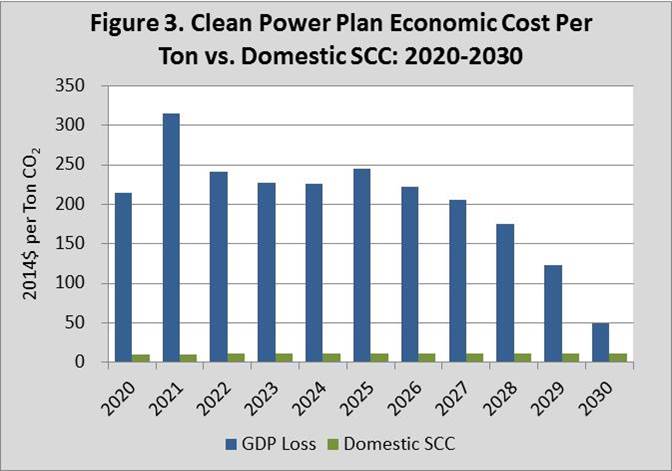 Applying this Domestic SCC to revise the cost and benefit figures calculated earlier, the cumulative net economic losses declines only modestly, moving from $1.23 trillion to $1.16 trillion (Figure 4) for an average of net annual loss of $105 billion and an average per-ton emissions reduction cost of $188. 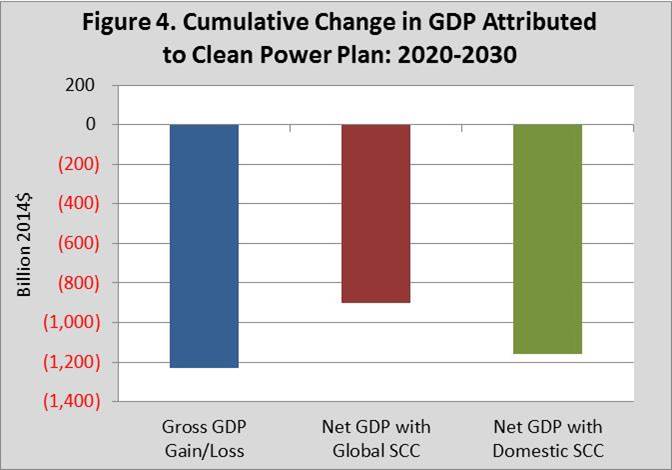 Maybe creating a huge new bureaucracy to implement carbon dioxide regulations that would highjack well-established state authority, disrupt the entire U.S. electricity sector, jeopardize the reliability of the electric grid, raise electricity costs on struggling families, and yield an estimated net loss in wealth of $899 billion to $1.16 trillion is appealing to EPA. But for the rest of the country, it’s a decidedly bad deal.

The Energy Institute has said repeatedly that the Clean Air Act is the wrong vehicle for regulating greenhouse gas emissions. EIA’s analysis proves it. 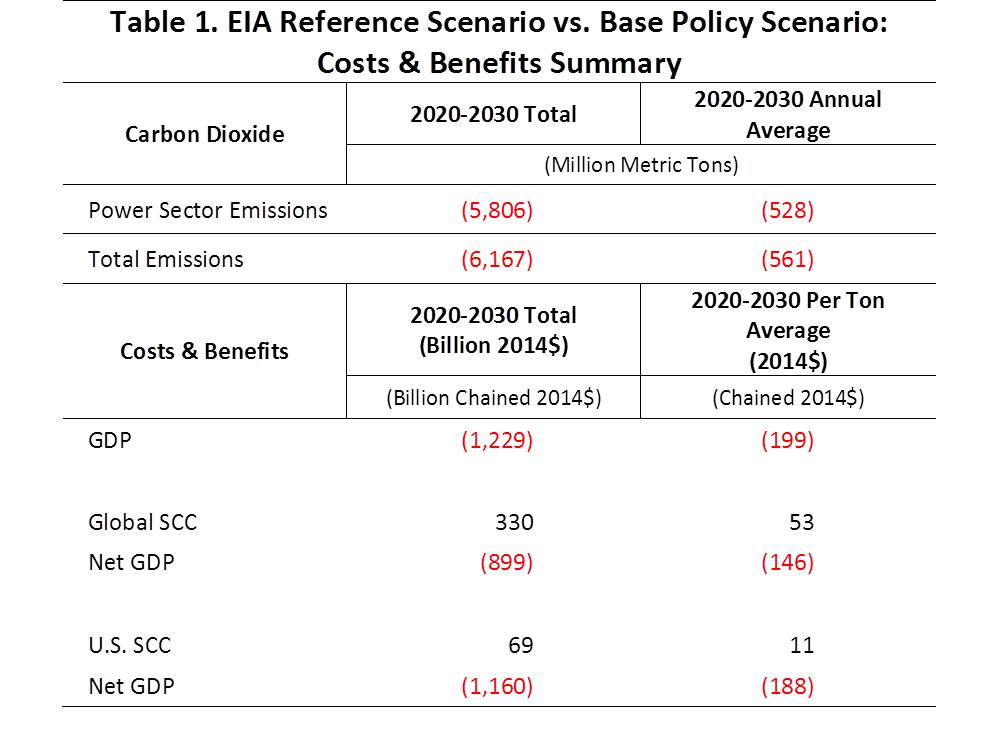