The energy security of the United States in 2019 was the most secure it has been since 1970, according to data in the 2020 edition of the annual Index of U.S. Energy Security Risk.

Covering 1970 to 2019, with a forecast out to 2040, the Index measures energy security based on 37 different metrics across a broad range of geopolitical, economic, reliability, and environmental risk factors. Like a golf score, the lower the Index score, the better our energy security. 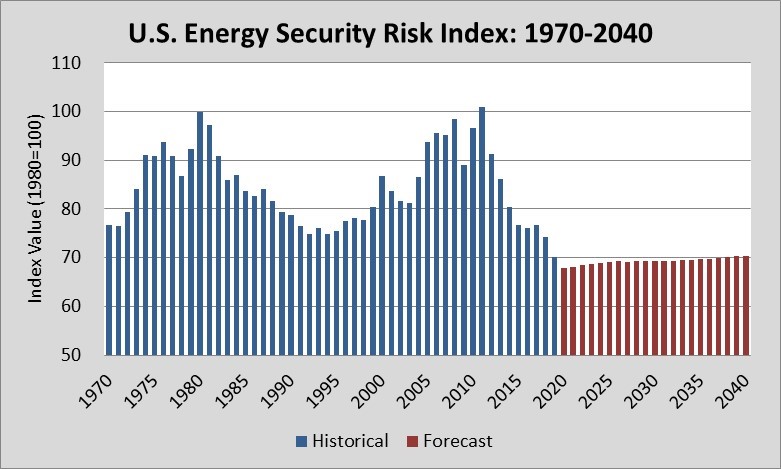 The tremendous increase in domestic energy production from the U.S. shale revolution—driven by the use of advanced hydraulic fracturing, horizontal drilling, and seismic imaging technologies—is the primary cause of the dramatically-improved security posture, especially in areas related to imports, prices, and emissions. Greater efficiency also played a role.

Looking to the future, forecasts prior to the COVID-19 pandemic indicate consistently low energy security risks out to 2040.

Highlights of the 2020 report include the following:

As this latest edition of the Index illustrates, the outlook for our future energy security is as promising as ever. While we may not be able to predict future geopolitical events with any confidence, we are in a much better position to overcome unforeseen circumstances and mitigate any risk to our economy and security.

The Index and its companion, the International Energy Security Risk Index, are available on our website.

@globalenergy
#ICYMI: The @USChamber and over 40 organizations from across the economy ask Congress to reform federal permitting as lawmakers begin work on #infrastructure legislation. #NEPA #UnlockAmericanInvestment @unlock_invest https://t.co/Tu55UfSBYQ