You’ve got to hand it to the Environmental Protection Agency (EPA). They are nothing if persistent.

When EPA proposed it Clean Power Plan (CPP) back in June 2014, its Regulatory Impact Analysis boasted that while the price consumers pay for electricity may increase under CPP, their electricity bills would decrease because of lower demand driven by enhanced demand-side energy management—energy efficiency. So while you might be paying a higher rate, you’d be using less and thus paying less. Got it?

We noted back then then how EPA’s target of a 1.5% annual energy efficiency improvement would be incredibly difficult to achieve, something 17 states brought to the attention of EPA in their comments on the rule. When the U.S. Department of Energy’s Energy Information Administration (EIA) looked at the CPP proposed rule, low and behold it turned out that not only would electricity costs go higher, but electricity bills would, too.

If you think that chastened EPA’s in any way, think again. When EPA issued its final rule last August, it persisted with the same claim. It’s Regulatory Impact Analysis for the final rule contends that under EPA’s preferred Mass-Based approach, the average electricity bill, after rising initially, will be about 7.7% smaller than otherwise in 2030. “These reduced electricity bills,” argues EPA, “reflect the combined effects of changes in both average retail rates (driven by compliance approaches taken to achieve the state goals) and lower electricity demand (driven by demand-side energy efficiency).” That’s EPA’s story, and they are sticking with it.

Now we have EIA’s latest examination of EPA’s final rule, and guess what? EPA got it wrong again.

While EIA estimates that electricity sales will decline in the CPP case compared to the No CPP case, the electricity price increases CPP will deliver are expected to overwhelm these declines in sales, leaving consumers with bigger, not smaller, electricity bills (Table 1). Using EIA’s data, we calculate that by 2030 electricity expenditures over all sectors will be on average 2.4% greater in the CPP case versus the No CPP case (1.8% for residences, 2.3% for commercial buildings, 3.6% for industry, and 5.0% for transportation). For 2030, this represents a not insignificant 10-percentage point average difference of opinion between EPA and EIA. 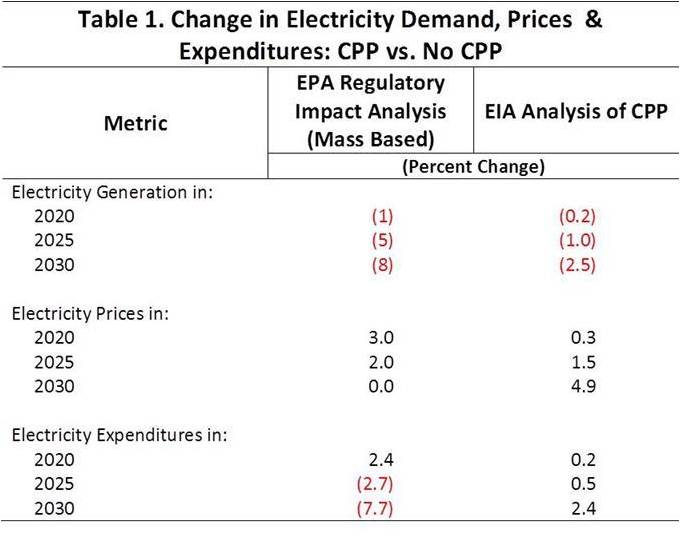 Rate increases such as those being forecast by EIA will have real economic consequences. We estimate that all consumers across all economic sectors will pay an additional $42 billion more for electricity over the 2020 to 2030 (Table 2). That might be pocket change for EPA, but for the rest of the country, that’s real money.

As we’ll demonstrate in a future post, pursuing CPP amounts to placing an entirely needless burden on families—especially low-income families—and businesses. But for now, we’ll just observe that the last thing the country needs is another regulatory roadblock. The economy’s tough enough as it is. 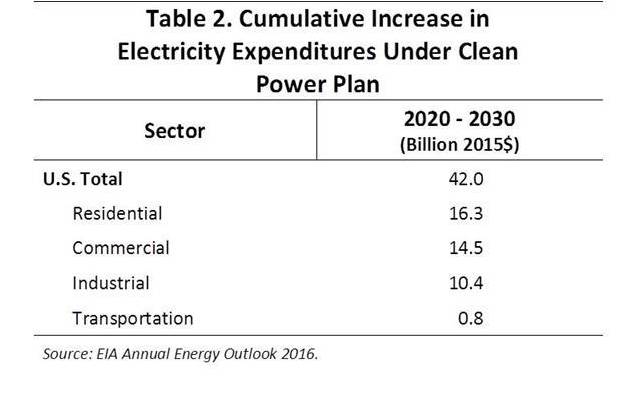