The good news just keeps coming from the Energy Information Administration (EIA), the analytical and data arm of the Department of Energy. Last week we told you about how America’s oil and natural gas producers are getting more out of each new well they drill.

This week EIA is reporting that in 2016 total U.S. energy expenditures (measured in real 2016 dollars) were about $1 trillion, one-third lower than their 2008 peak. Better yet, as a share of GDP, energy expenditures in 2016 were at their lowest level—5.6%—since at least 1970, the first year EIA reports these data. The charts nearby shows both of these trends.

So what’s going on? “The decrease in total U.S. energy expenditures in 2016 was entirely attributable to lower energy prices, as total energy consumption has remained virtually unchanged since 2013. The U.S. average energy price was $15.92 per million British thermal units (Btu) in 2016, down 9% from 2015, and the lowest since 2003, when adjusted for inflation. Average energy prices reached their highest point on record in 2008, when they averaged $24.13 per million Btu.” That’s more good news for businesses and consumers.

EIA cautions, however, that prices in 2017 and 2018 will be higher: “Based on realized prices in 2017 and some months in 2018, EIA does not expect the downward energy price trend to continue, as average energy prices of products such as motor gasoline, natural gas, and retail electricity have all increased since 2016, contributing to higher U.S. energy expenditures since that year.” Still, EIA doesn’t expect the prices will to rise to anywhere near their former highs will remain considerably lower than for many of our overseas competitors.

EIA also breaks down expenditures by state (see the nearby map). Not surprisingly, states with relatively large industrial and mining sectors—e.g., Alabama, Louisiana, Mississippi (10.8%), West Virginia, and Wyoming—tend to pay more for energy as a share of GDP than states where energy-intensive industries contribute less to state GDP—e.g., California, Massachusetts, and New York. Nevertheless, even in states where energy expenditures as share of GDP are relatively high, it is much lower than in the past. Indeed, EIA notes that, “Overall, every state saw lower expenditures per GDP in 2016 compared to 2015, and 24 states and the District of Columbia reached their lowest ratio on record in 2016.”

This latest round of data is further evidence that America’s energy renaissance is paying off—literally. 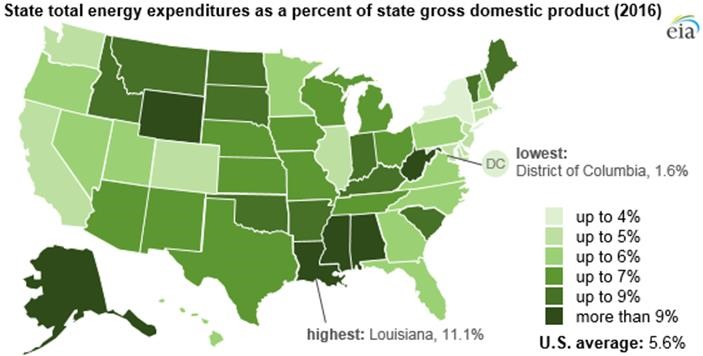