Since President Obama has left office, we’ve been getting a lot of requests for retrospective “Mind the Gap” analysis to see where we stand with the Obama Administration in the rear-view mirror.

Recall that the Obama Administration—without, it must be said, seeking any advice from the business community or the Congress—pledged that the United States would slash its net greenhouse gas emissions at least 26%, and aim for 28%, below the 2005 level by 2025. (The Obama Administration also agreed subsequent to the infamous Copenhagen international climate change meeting in 2009 to reduce emissions 17% below the 2005 baseline by 2020.)

Our first gap analysis was in August 2015, where we (generously) estimated that policies in place would fall about halfway short of the necessary emissions reductions needed to achieve the Administration’s goal—about the same as the Obama Administration itself estimated in its 2016 Biennial Report to the UN Framework Convention on Climate Change (see our relevant blog post). So two years on, how does President Obama’s pledge look? Not much better.

Before beginning, note that numbers may not add up because of rounding. Also note that we do not include emissions from U.S. territories, which as far as we can tell are not included in the Obama Administration’s pledge and don’t amount to much anyway.

As in the past, to evaluate President Obama’s 27% goal we used the Environmental Protection Agency’s (EPA) U.S. Greenhouse Gas Inventory Report, the Energy Information Administration’s (EIA) Annual Energy Outlook (with and without the Clean Power Plan (CPP)), the 2016 Second Biennial Report mentioned earlier, Obama Administration fact sheets, and Federal Register notices: (1) to calculate a baseline estimate of future GHG emissions; and (2) to estimate reductions that could be reasonably expected to occur from announced programs. It should also be noted that many of the programs detailed in our earlier analyses are now included in the baseline, so while the list of identified policies may be shorter than in previous years, their impacts are still be felt in the “Business as Usual” projection.

For our Business as Usual baseline, we estimate that without any further action net emissions would be around 5,860 MMTCO2 in 2025, about 675 MMTCO2 lower than the 2005 level. This is a much larger contribution from Business as Usual than in our first analysis because it now includes such items as new light duty and heavy duty vehicle fuel standards, the Production Tax Credit and Investment Tax Credit for wind and solar power, EPA SNAP and landfills programs, appliance standards, and the like. (Given the Supreme Court’s stay of EPA’s Clean Power Plan, we did not include that in the baseline.) So to achieve the 27% goal would require an additional reduction of a not insignificant 1,090 MMTCO2.

Major Obama-era policies we analyzed include the Clean Power Plan, methane reductions from oil and natural gas systems, the Kigali Agreement of HFCs under the Montreal Protocol, and the commercial aviation industry’s goal of stabilizing carbon dioxide emissions after 2020 as part of an agreement reached in the International Civil Aviation Organization.

As the accompanying chart shows (Figure 1), these additional Obama-era rules and programs could lead to a further 475 MMTCO2 of reductions in 2025, which when added to the Business as Usual reduction yields a total reduction of 1,150 MMTCO2 below the comparable 2005 level. 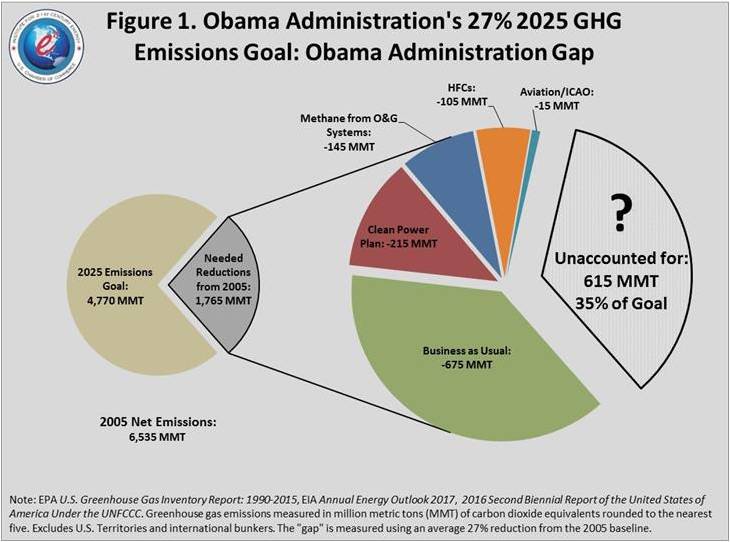 Here's how we arrived at the 475 MMTCO2 figure:

Given all of this plus Business as Usual reductions, we estimate that U.S. emissions in 2025 would fall about 1,150 MMTCO2 below the 2005 level to 5,385 MMTCO2, about 615 MMTCO2, or 35%, short of President Obama's goal (Figure 2). To put this in perspective, an additional three Clean Power Plans would be needed to close this gap entirely.

So what would it take to fill the remainder of the gap and get to the 27% reduction, and how much would that cost? We’re glad you asked.

Thanks to some analysis undertaken by NERA Economic Consulting and sponsored by the Energy Institute and the American Council for Capital Formation, Impacts of Greenhouse Gas Regulations on the Industrial Sector, we have a pretty good idea of the devastating economic impacts, especially to the industrial sector, of meeting President Obama’s Paris pledge. The list of regulations promulgated by the Obama Administration is extensive, and the only place to get additional emission reductions is the industrial sector. NERA’s central scenario projects achieving the INDC would essentially surrender the competitive edge our industries enjoy thanks to the America’s energy revolution. Specifically, the report estimates that by 2025:

There’s a whole lot more in the study, including a look at some alternative scenarios that include carbon pricing, and we encourage you to take a look.

In the meantime, we’ll continue to mind the gap! 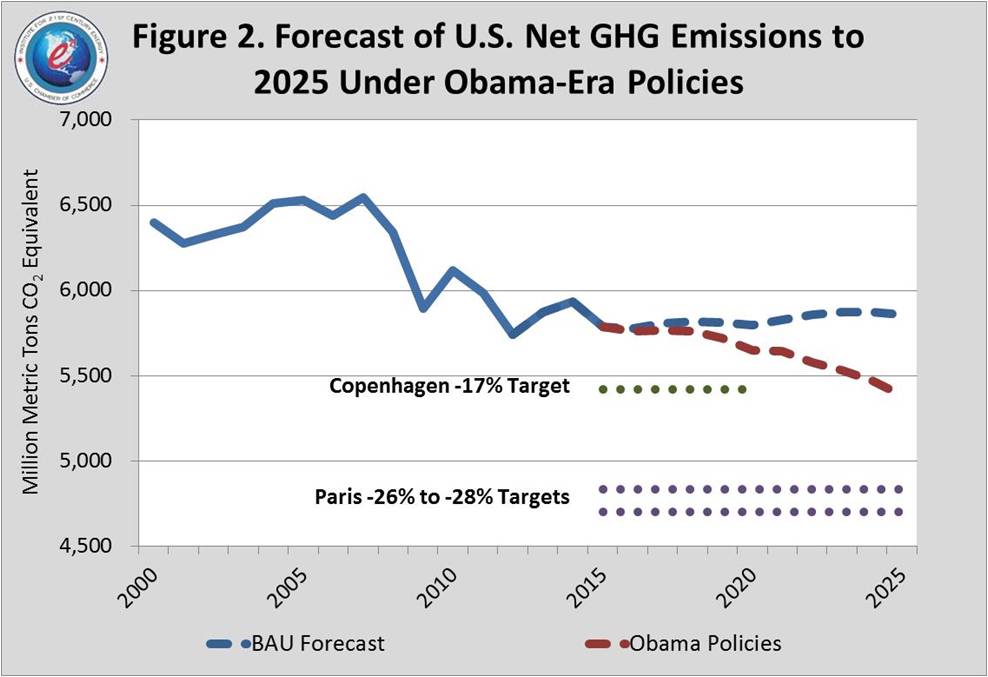