As my colleague Dan Byers recently wrote, although you wouldn’t know it from the dialogue in this country, Americans are enjoy some of the cleanest air in the world, with improvements in numerous cities every year.

The latest inventory covers the years 1990 to 2016 and includes data on carbon dioxide, the largest source of GHGs, methane, nitrous oxide, hydrofluorocarbons, perfluorocarbons, sulfur hexafluoride, and nitrogen trifluoride. It also includes estimates for how much atmospheric carbon dioxide is absorbed by “sinks,” primarily by forests and vegetation. (While in the United States, emissions from Land Use, Land Use Change, and Forestry (LULUCF) are negative, in many countries, LULUCF is a source of carbon dioxide emissions, not an emissions sink.)

Total net emissions of all GHGs in the United States (excluding U.S. territories) fell 2.5% in 2016 for the second consecutive year to 5,753 million metric tons carbon dioxide equivalent (MMTCO2eq.). Total net GHG emissions peaked in 2007 at 6,653 MMTCO2eq. and have declined since then at an annual rate of about 75 MMTCO2eq. By 2016, total net emissions were almost 13% below their 2007 peak.

Our interest is primarily in emissions from energy consumption, which account for three-quarters of total gross GHG emissions. So let’s take a look at the data for energy-related emissions in five sectors: electric power, transportation, industrial, residential, and commercial.

The chart nearby below shows emissions data for these five sectors. Energy-related carbon dioxide emissions also peaked in 2007 when they were 5,703 MMTCO2. Over the next ten years, emissions declined roughly 780 MMTCO2 to 4,926 MMTCO2 in 2016, a drop of nearly 14%. As a result, total energy-related emissions in 2016 were lower than for any other year since 1993.

More than three-quarters of that total decline in energy–related emissions since 2007 occurred in the power sector. Greater use of natural gas, regulations targeting coal, tax credits for renewables, and continued improvements in electricity intensity—i.e., the amount of electricity needed to produce a dollar—all contributed to the decline in power sector emissions. At a bit more than 1.8 gigatons of carbon dioxide, power sector emissions in 2016 were at their lowest level in the EPA record going back to 1990.

While emissions from the power sector are much lower in 2016 compared to their 2007 peak, emissions from the transportation sector are higher. After declining between steadily from 2007 to 2012, emissions increased each year from 2013 to 2016 to 1,783 MMTCO2. Lower fuel prices and an enduring consumer preference for pick-up trucks and SUVs contributed to the rise. If current trends persist, the transportation sector will overtake power sector as the largest source of U.S. emissions.

Residential and commercial emissions both declined in 2016. Over the long term—that is, since 1990—there has no discernible tends in emissions for either of these sectors. Both have become much more efficient, but in the residential sector in particular the drift towards larger homes, more electronic devices, and more people moving to warmer climes have increased energy use, offsetting efficiency gains.

Preliminary Data from the Energy Information Administration suggest that total energy-related emissions will decline again in 2017 even as emissions for some of these individual sectors, most notably transportation, rise. We’ll continue to monitor data from other countries, but it’s difficult to see another country improving greatly on the performance of the United States over the last 10 years. 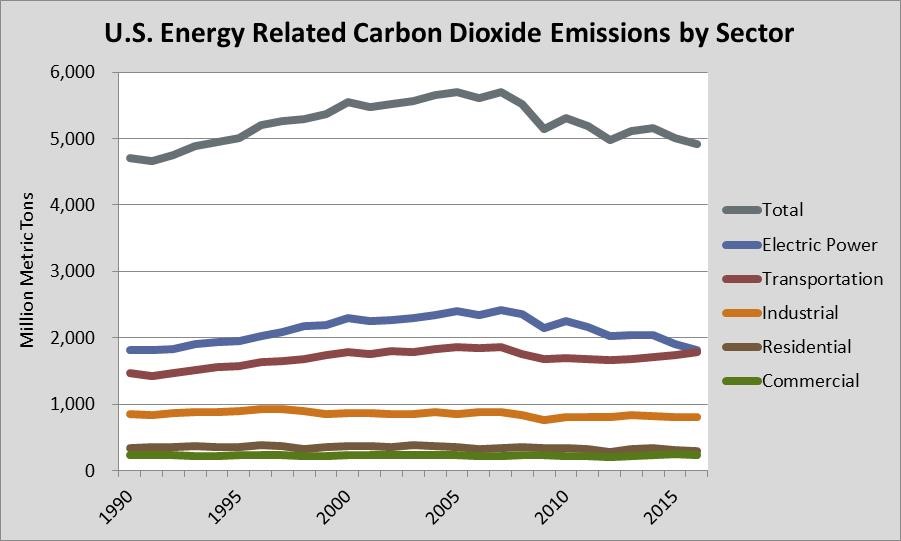 @globalenergy
#DYK: Power sector #emissions in 2018 were at their 2nd lowest level recorded by the @EPA going back to 1990? In fact, more than 90% of that total decline in #energy–related emissions since 2007 occurred in the power sector. Learn more in our latest blog: https://t.co/GBzYO2RTuq pic.twitter.com/zOJf7PCfmM