Over the past 24 hours, one of the first significant storms of the 2018 hurricane season is threatening the eastern shores of the Gulf Coast. Hurricane Gordon made landfall just below hurricane strength late Tuesday night near the Alabama/Mississippi border, about 30 miles east of Biloxi, Mississippi. In the hours prior, Alabama and Mississippi officials issued hurricane warnings and prepped residents to prepare for evacuations. Meanwhile, Louisiana governor John Bel Edwards issued a state of emergency.

According to the National Hurricane Center, sustained tropical-storm-force winds associated with Gordon are most likely to begin moving onshore the northern Gulf of Mexico coast. A hurricane warnings will remain in effect from the mouth of the Pearl River to the Alabama-Florida border, but Gordon is reportedly weakening as it passes over Mississippi. 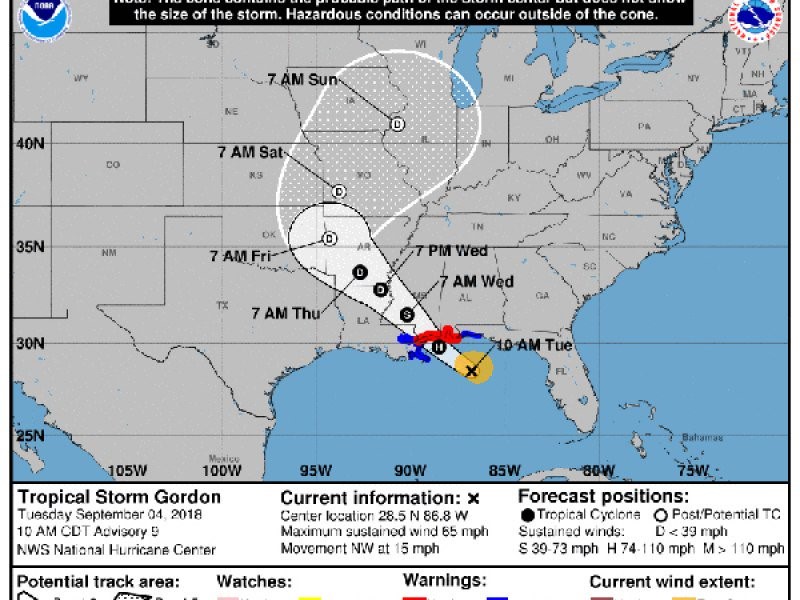 While the safety and security of those in the storm’s path is always paramount, the Gulf Coast represents a vital area to our country’s energy sector. As the storm continues, GEI will update readers on regional energy capacity, outages, and aggregate industry updates.

According to reports, companies cut 9 percent of U.S. Gulf of Mexico oil and gas production on Tuesday as the storm churned toward an expected nighttime landfall.

The latest outage numbers are hovering around 40,000 customers across Gordon’s impact area.

According to Alabama Power, there are more than 21,000 customers without power. Alabama Power crews are working on restoring power where it is safe to do so. Please report your outage or any safety concerns to 800-888-2726.

According to Louisiana power provider Entergy, more than 1,500 customers are without power with additional areas being surveyed. “We are monitoring the potential challenges this storm may bring to Louisiana and stay prepared to respond to storm outages through a very detailed, rehearsed plan,” said Melonie Stewart, Entergy’s vice president of distribution operations for Louisiana.

As Gordon approached offshore facilities, offshore operators took precautions to safeguard their employees, equipment and the environment. According to the Bureau of Safety and Environmental Enforcement (BSEE), personnel have been evacuated from a total of 54 production platforms, 7.86 percent of the 687 manned platforms in the Gulf of Mexico.

Anadarko Petroleum Corp said on Monday that it had evacuated workers and shut production at two oil platforms in the northern Gulf of Mexico.

Chevron Corp oil and natural gas production levels at its offshore operations remained normal on Monday, company spokeswoman said. Chevron also said on Monday staff at its 352,000 barrel per day refinery at Pascagoula, Mississippi, were monitoring the storm carefully and preparing the plant for wind and rain. The Pascagoula refinery is closest to the landfall location currently forecast for Gordon.

PBF Energy was securing scaffolding in preparation for high winds at its 190,000-bpd Chalmette, Louisiana, refinery.

Royal Dutch Shell Plc plans to increase staffing at its 218,200 bpd Norco, Louisiana, refinery west of New Orleans, as it prepares the refinery for high winds.

Valero Energy Corp was readying its 125,000-bpd Meraux, Louisiana, refinery on the east side of New Orleans.