According to DOE, all ports have reopened but coastal areas impacted by Florence in North and South Carolina are experiencing outages at retail fuel stations due to power outages and conditions preventing resupply from terminals. There are no refineries in the immediate impact zone of Hurricane Florence (NC, SC, GA, VA) and states are working closely with industry to expedite resupply shipments to impacted areas. Finally, pipeline operators are following storm procedures and no significant issues have been reported at this time.

According to reports, as of 6 p.m., Wednesday, the power outage total was 160,558. Most of the outages are in Beaufort, Bladen, Brunswick, Carteret, Columbus Craven, Duplin, New Hanover, Robeson, Sampson, Wake, Wayne, Pamlico, Pender and Onslow counties near the coast. Crews continue to work around the clock to restore power where it is safe and conditions allow. Impacted electric companies report that they already have restored power to more than 1.8 million customers since the storm began.

Duke Energy, the most impacted company, reports that it expects to restore power to 90 percent of coastal customers impacted by Hurricane Florence by Friday. See Duke Energy’s map for estimated restoration times.

For official updates from the Department of Energy, check out the frequently updated situation reports.

As of late Monday, about 500,000 homes and businesses are still without power in North and South Carolina. Since the storm continues to cause heavy rains, flash flooding is still a concern over the Carolinas.

Duke has dispatched more than 20,000 workers to the area to reconnect its customers. Duke Energy Corp. said Monday its crews have restored power to more than 1.2 million customers who lost electricity when Hurricane Florence slammed across the Carolinas.

As of 4:00 p.m. EDT on September 16, approximately 664,000 customers were without power in North and South Carolina. Power outages will continue to fluctuate as flooding moves or limbs and trees continue to fall.

Crews are working around the clock to restore power where it is safe and conditions allow. Impacted electric companies are reporting that they already have restored power to more than 1 million customers since the storm began. As the storm progresses, electric companies are reallocating resources strategically to ensure a safe and efficient response.

Power restoration follows a detailed process. First, power is restored to essential services and facilities critical to public health and safety, such as hospitals, nursing homes, fire and police departments, and water systems. Then, crews work to return service to the largest number of residential and business customers in the shortest amount of time. Once major repairs are completed, individual homes and smaller groups of customers are restored.

As of 7:30 a.m., Friday, 403,000 people were without power across North Carolina. Scattered outages have also surfaced in South Carolina (12,200) and Virginia (2,300), according to the Data Fusion Solutions’ power outage tracking tool.

Electric companies in the path of the storm have activated their emergency response plans and pre-positioned equipment, resources, and crews in strategic locations to prepare for potential power outages and to minimize the time needed to begin damage assessment and recovery efforts.

More than 40,000 workers from at least 17 states already are mobilized to respond to Florence. This workforce includes crews and support personnel from the potentially impacted investor-owned electric companies, public power utilities, and electric cooperatives; contractor resources; and additional workers from mutual assistance partners. Additional electric companies outside of the storm zone continue to monitor and assess the situation and are ready to assist.

Companies affected by the storm, and the crews assisting the restoration effort, will work around the clock to restore power safely and as efficiently as possible once it is safe to do so. It is important to remember that crews will not be able to use certain equipment, including bucket trucks, until high winds subside. Flooding is also a major concern, and damage assessments and restoration cannot begin until it is safe to do so. In flooded areas, search and rescue and life safety will be the top priorities.

According to the National Hurricane Center, Hurricane and storm surge watches were issued for portions of the coasts of the Carolinas have already been issued. Roughly one million residents across the Carolinas and Virginia were administered mandatory evacuation notices and President Donald Trump approved emergency declarations in the Carolinas on Monday night, allowing the Federal Emergency Disaster Agency to assist with disaster relief efforts. 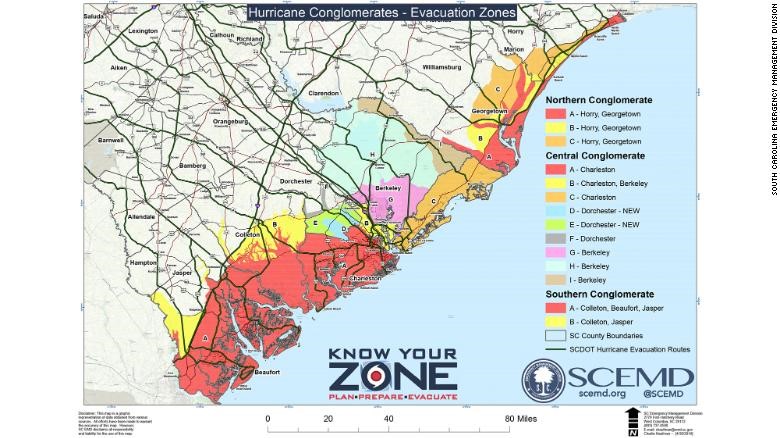 As the storm continues, GEI will update readers on regional energy capacity, outages, and aggregate industry updates. Additionally, the Chamber Foundation has resources for businesses that walk you through how to prepare your business for a natural disaster.

According to reports, Duke Energy is positioning crews from its Indiana, Ohio, Kentucky and Florida utilities for a rapid response into Carolinas. "We're pre-staging field staff and equipment to sites closest to the coast, including Cape Fear, HF Lee, Sutton and Weatherspoon in North Carolina and Robinson in South Carolina," a Duke spokeswoman said of the company's coal ash basins. "These sites already have lower levels of water in the ash basins due to our basin closure work and can hold significant rainfall. We're also working to lower leachate levels at our landfills to prepare them for the storm."

Nuclear power plants are also taking precautions ahead of Florence’s arrival. To prepare for the storm, nuclear operators check on backup diesel generators to make sure they have enough fuel, conduct site walk downs and secure any loose equipment that could become a projectile in the wind, according to the Nuclear Regulatory Commission.

More than 500 Florida Power & Light Company lineworkers traveled to the Carolinas to respond to Florence. In addition, line crews from TECO, Entergy Mississippi, Duke Energy, OG&E and Entergy Arkansas sent convoys of bucket trucks to help the utilities who could soon be impacted when the hurricane makes landfall.

EEI’s Storm Center is a resource for real-time information and updates on storm preparation and restoration progress. It also includes a map to company outage centers.