Following unsuccessful attempts by the Obama Administration to pass federal legislation that would curb greenhouse gas emissions, the Administration decided to go it alone and pursue executive action.  The first rule issued, called a “New Source Performance Standard,” makes it almost impossible to build a new coal-fired power plant.  The second rule proposed about a year later deals with existing sources of power—current power plants—and has been named the “Clean Power Plan” by the EPA.  This highly complex rule consists of 47 different state standards and will have the result of shutting down a large percentage of U.S. power plants.

On this page, we’ll examine the rules and detail the Chamber’s opposition to the rules, which is grounded in our belief that they will significantly harm the U.S. economy while providing negligible benefits to the environment.

The Environmental Protection Agency’s (EPA) expansive regulations aimed at reducing the output of carbon dioxide from the nation’s fleet of fossil-fueled electric generation facilities has been closely followed by the Energy Institute since the concept of these rules was first uttered by President Obama during an energy policy speech delivered at Georgetown University in June 2013.  As the overwhelming backbone of our nation’s electrical grid, electrical generation powered by coal and natural gas regularly accounts for nearly seventy-percent of the electricity used by American industry, businesses, and consumers to power our economy, light our stores, and keep our homes warm in the winter and cool in the summer.  As such, any significant regulation of these sources, with a potential to either dramatically increase their operating costs or drive them out of business, is naturally of significant concern to the diverse, economy-wide small and large businesses represented by the U.S. Chamber of Commerce.

Pursuant to the President’s direction, the EPA crafted separate rulemakings addressing the carbon dioxide emissions from new, as-yet-unbuilt power generating facilities, and for the nation’s significant existing fleet of fossil-fueled electric generation.  Through the issuance of proposed rules, the submission of literally millions of comments in response, and the EPA’s issuance of final rules on August 3, 2015, the EPA has proposed to dramatically change how electricity is generated, distributed, and used across the nation.

The EPA issued the first of these two rulemakings in September 2013, which applied to electric generation facilities not yet built, with this proposed rule referred to as the “New Source Performance Standard” or “NSPS.”  The NSPS proposed to require that any new generation units fueled by natural gas meet a limit of 1,000 pounds of carbon dioxide per megawatt-hour, while any such new facilities fueled by coal would have to meet a carbon limit of 1,100 pounds of carbon dioxide emissions per megawatt-hour of electricity generated.  These proposed limitations would not prevent the development of modern generation facilities using natural gas, the proposal effectively banned the construction of coal-fired generation due to the fact that the most technologically advanced coal-fired power plants in the nation still emit approximately 1,700 pounds of carbon dioxide per megawatt-hour of electricity produced.

In June 2014, the EPA issued its second rulemaking, with this one applicable to the nation’s fleet of existing generation resources.  The EPA’s “Existing Source Performance Standard” or “ESPS” was also referred to by the EPA as its “Clean Power Plan.”  The ESPS aimed to reduce overall emissions of carbon dioxide from the nation’s power sector by 30% from 2012 to 2030.  Through a complicated formula and the application of “building blocks” that looked across the entire power sector – instead of just the regulated power plants – to amass reductions in carbon dioxide emissions, the EPA sought to insert itself into electric generation, distribution, and utilization decisions that had previously been reserved for state lawmakers and regulatory bodies.  The EPA’s proposal to dramatically reconfigure the power sector, which is arguably the backbone of our nation’s economy, thoroughly captured, and continues to keep, our close attention.

Following the submission of comprehensive comments from the U.S. Chamber of Commerce and literally millions of other individuals and entities, the EPA, again being quickly driven by arbitrary dates announced in the President’s 2013 Georgetown speech, the EPA produced its final versions of both its NSPS and ESPS regulations applicable to the electric power sector on August 3, 2015.  The NSPS final rule resulted in moderate improvement over the proposal, yet it still effectively banned the construction of new coal-fired power plants across the nation by continuing to propose a carbon dioxide emissions rate that undercut (now by approximately 300 pounds of carbon dioxide per megawatt-hour) the technological capability of the most modern coal-fired generation facilities in America.  As such, the construction of new, state-of-the-art coal-fired generation facilities here, where we possess the largest coal reserves in the world, was outlawed.

The ESPS final rule doubled-down on the far-reaching electric sector reconfiguration initially proposed by the EPA.  Here, the EPA raised its carbon dioxide reduction goal to 32% of power sector emissions, and it increased the complexity of its formulas and the variabilities for compliance with the individual state limits dictated by the rule.  Of particular note, the EPA established carbon emissions limits for existing fossil-fueled electric generation resources that were actually more strict than the standards the EPA announced as applicable to new, state-of-the-art generation facilities in the NSPS rule.  As such, this disparity exposed the EPA’s unwavering effort to regulate the overall generation, distribution, and use of electricity – through mandating carbon dioxide reduction activities economy-wide – as opposed to focusing on the actual sources of emissions that had traditionally been subject to EPA regulation.

Given the EPA’s failure to address the many infirmities – both legal and practical – with the NSPS and ESPS rules, the Energy Institute, through its affiliated U.S. Chamber Litigation Center, has been forced to seek judicial redress from the EPA’s unprecedented carbon dioxide reduction regulations.  We are not alone, however, as more than half the states and dozens of associations and other entities have joined the legal effort to reign-in the EPA’s most significant regulatory overreach to date.  Through this legal effort, along with our continuing legislative, grassroots, and social media education and outreach efforts, we will continue to keep lawmakers and the public informed of the specific harms of the NSPS and ESPS regulations, the likely impacts from the rule, and by undercutting the myths that attempt to cast the rules in a positive light.  This is an ongoing effort, and this section of our website serves as a comprehensive repository of our efforts, to date, to stand up to the EPA’s effort to increase the price of electricity and decrease the reliability of our nation’s electric power sector.

Having been unable to stop the executive action taken by the rules, it has become necessary to turn to the courts.

The U.S. Chamber, joined by over a dozen business groups, filed a lawsuit in the U.S. Court of Appeals for the D.C. Circuit to challenge the Environmental Protection Agency’s (EPA) rule regulating greenhouse gas emissions under Section 111(d) of the Clean Air Act—an unprecedented takeover of the electricity sector. Because the rule is already causing irreparable harm to businesses and communities across the country, the Chamber also asked the D.C. Circuit to stay implementation of the rule until judicial review has been completed. A group of 27 states also filed suit against the EPA’s rule. While the D.C. Circuit did not grant the stay motion, the United States Supreme Court did, which halts implementation of the rule until litigation has been fully considered. The Chamber’s suit was consolidated with the others opposed to the rule, and on February 19, the Chamber and the group of over 150 organizations filed their opening brief. In addition, 166 state and local Chambers filed an amicus brief in support of the suit.

For a complete discussion of the litigation against the Clean Power Plan, including court documents, visit https://www.chamberlitigation.com/chamber-commerce-et-al-v-epa-esps-rule 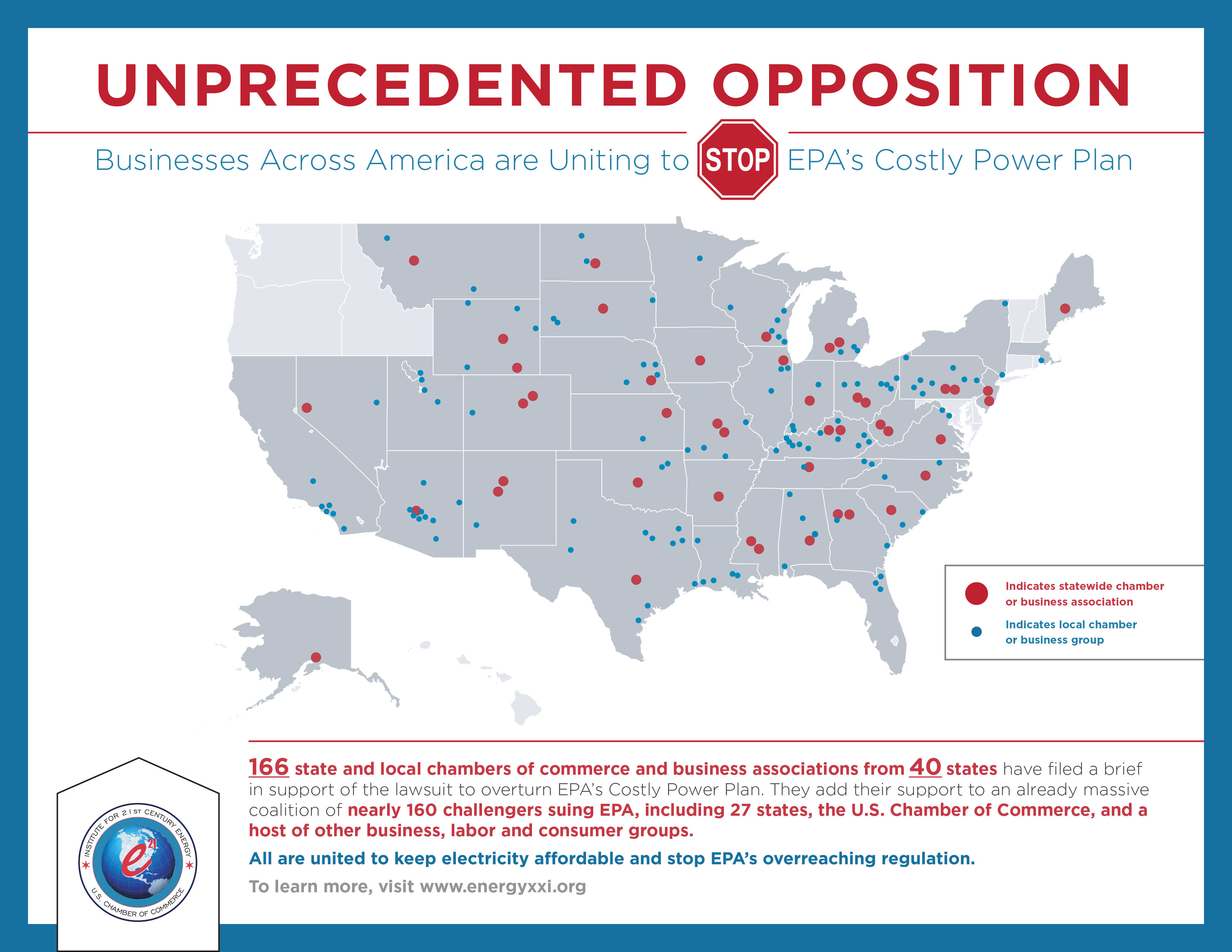 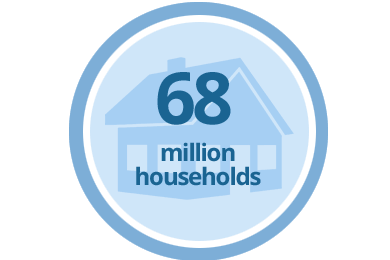