One of our most popular annual features is our state-by-state comparison of electricity prices.  As in past years, we base our electricity rate map upon the most recent full year price data released by the U.S. Energy Information Administration.  The prices reflected on the map continue to reflect what consumers, businesses, and industry must pay for a standardized unit – or kilowatt hour (kWh) – of electricity.

To enhance its usefulness our 2017 edition has a new, streamlined look, with “heat-map” shading that more readily identifies the states with lower electricity prices while highlighting those where residents are simply paying too much to power their homes and run their businesses.  In addition, we have rearranged our individual state price page to group states according to their respective price ranges; listing together the lower-priced and medium-priced states, while also isolating the states where electricity prices start at nearly double those of the low price leaders. 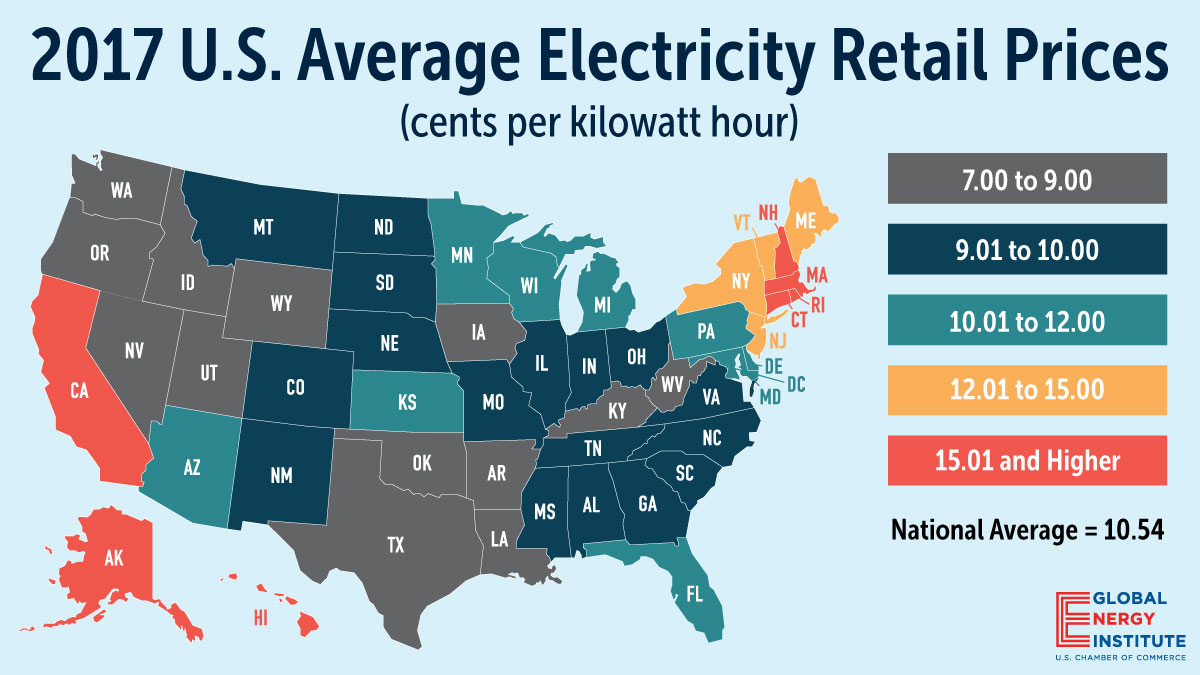 Reflecting on our past maps helps to explain where we have been, while also helping to tell the story of where prices might be heading.  Three years ago, our map illustrated the grim reality of increasing retail electricity prices.  During 2014, all but one state (Michigan) experienced an increase in their electricity rates.  The tide began to turn in 2015, when we identified an about-face in twenty states’ rates, while the prices in the remaining thirty states continued to increase.  Last year, the 2016 year-end rate map reflected a nationwide annual rate decrease of .13 cent/kWh.  The number of states experiencing a year-over-year decrease in rates increased to twenty-seven, while twenty-three states experienced rate increases.  Fortunately, many of the states seeing rate increases remained among the lowest-priced states in the nation.

In 2017, we actually have the highest national average retail electricity price of the past four years: 10.54 cents/kWh.  This tops the 2016, 2015, and 2014 national average rates of 10.28, 10.42, and 10.13 cents/kWh, respectively.  However, that does not mean that everyone is paying more.  In actuality, many of the states with lower prices, such as Louisiana and Texas, are paying significantly lower rates today than they experienced back in 2014.  Over this period, Texas fell from 8.99 to 8.55 cents/kWh, and Louisiana reduced its rates from 8.11 to 2017’s 7.75 cents/kWh.  Driving the overall national increase are consistent year-over-year increases in many of the highest cost states, such as California and most of New England.  Meanwhile, energy-rich states such as Pennsylvania and Ohio continue to watch their retail electric prices lowered by the benefits of abundant shale gas resources.

Not surprisingly, of the eight states that experienced a decline in their electricity rates from 2016 to 2017, half of those states are either awash with shale gas (Pennsylvania and Ohio), or directly border them (Delaware and Maryland).  Since New York’s leaders have an irrational aversion to new pipeline infrastructure, they are burdened with higher electricity prices (up .31 cent/kWh last year), while they impose a blockade against American natural gas reaching New England states.  Things have gotten so extreme that some states are importing Russian gas from across an ocean instead of utilizing shale from just a few hundred miles away.

Alaska and Hawaii remain challenged due to their remote nature and their inability to tap into a diverse set of energy resources.  Nevertheless, those enjoying the tropical trade winds in Hawaii are enjoying electric rates that are over 7 cents/kWh less than they were paying in 2014.  That is big progress for the Aloha state, driven in part by lower oil prices and a diversification of resources with the increasing addition of cost-effective renewables to their fuel mix.

Connecticut remains the electricity price loser on the mainland United States, with a 17.62 cent/kWh rate; meaning that residents of the Constitution State are now paying almost as much to power their homes than even grid-constrained Alaskans. Save for Massachusetts, which this year caught a break from its usually upward price trajectory, every one of the seven highest-priced states (in red) saw increased prices this year.  Meanwhile, the middle of the country, with ready access to a diverse mix of coal, nuclear, natural gas, and renewable energy generation technologies, continues to see rates that are near or considerably below the overall U.S. national average of 10.54 cents/kWh.

While the average price is up this year, the Tax Cuts and Jobs Act passed by Congress in December is likely to help moderate or even reduce the electricity prices seen across the board – even in those higher-priced states.  Why?  Utilities typically recover their cost of doing business in the rates they charge customers, both big and small.  Along with personal tax cuts, the December tax bill lowered corporate tax rates from 35% to 21%, meaning that utilities’ future costs were reduced as a result.  These reduced costs will now be reflected in rates; either automatically with utilities that charge an automatically-adjusting “formula” rate, or through rate filings at both the federal and state level that will integrate the new, lower tax costs faced by utility companies.  In late February, thirty-nine states were already touched by these lowered rates, while other states will join this tally as the Federal Energy Regulatory Commission moves forward with its efforts to realize rate savings for electricity consumers.

We certainly cannot guarantee that every state will see reduced 2018 rates, in part because tax rate reductions may serve to offset cost increases that otherwise may have been necessary, for example to repair the damages from last year’s active hurricane season.  However, the tax cuts are highly likely to have positive impacts on state rates and the overall national average.  Here’s hoping that next year sees more state level rate decreases.  That would be good for those states, and good for America’s global competitiveness.

Note:  In order to eliminate any confusion that may arise when making a direct comparison of this year’s map to the 2016 rate map, it is important to note that we utilize the U.S. Energy Information Administration’s (EIA) preliminary annual data, from the February edition of Electric Power Monthly, to develop our annual maps and rate comparisons.  The EIA’s preliminary data is then subject to modification in the subsequent months as EIA finalizes their electricity price data.  We use EIA’s preliminary data in order to deliver timely information, but slight variances from the final figures do occur.  Please note, however, that for the purposes of comparing year-over-year trends, we have used EIA’s near-final 2016 numbers instead of the preliminary numbers used in our 2016 map to maximize the accuracy of our trend analysis.

New: #Electricity Price Map - how much is your state paying?