A few of weeks back, we told you about how the Energy Information Administration’s (EIA) Annual Energy Outlook 2016 showed the harm Environmental Protection Agency’s (EPA) Clean Power Plan (CPP) will have on coal demand and employment. It wasn’t a pretty picture.

Recently, it’s been suggested in some quarters that impacts of CPP will not arrive until the initial compliance period of 2022, and certainly not during the judicial review period that is currently underway while the rule is on ice due to the Supreme Court’s unprecedented stay decision earlier this year. If there is no harm before the rule goes into effect, the argument goes, there’s no need for the Supreme Court’s stay to remain in place.

We’ll leave the legal arguments to the lawyers and just focus on whether or not any harms occurs before 2019. Luckily, we have the EIA’s latest Annual Energy Outlook, which has a “CPP Case” and a “No CPP Case.” Does it show any harm pre-2022? You betcha.

Take a look at the first chart. It shows coal production slipping lower in the CPP Case versus the No CPP Case as early as 2016. BY 2021, the year before the first compliance year, coal demand is about 5% lower because of CPP. 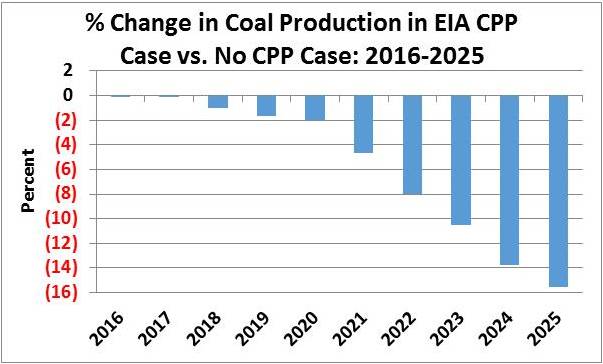 What about coal plant closures? Same story, different numbers. The second chart below shows that cumulative closures of coal-fired power plants be considerably higher in the CPP Case versus No CPP Case—starting in 2016! On average, between 2016 and 2021, cumulative closure of these plants runs about 6 gigawatts, (or about 12%) higher thanks to CPP.

If the Obama Administration itself is projecting immediate harms from a rule that represents one of its top domestic policy priorities, then it seems safe to say that the likelihood of those harms is very real. 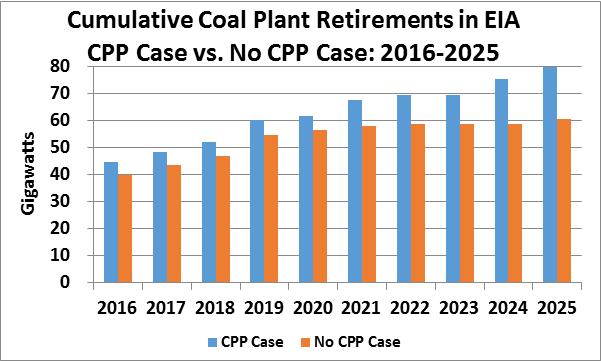