Have you heard the good news about the excellent state of U.S. air quality? Chances are, you haven’t. In fact, chances are more likely that you’ve heard something of the opposite—glum stories of smoggy skies and unhealthy air constantly under threat from industrial pollution and SUVs.

Reality begs to differ. A new report from a group of state regulatory agencies: The Greatest Story Seldom Told: Profiles and Success Stories in Air Pollution Control, chronicles the dramatic improvements to U.S. air quality over recent decades and contrasts that with Americans’ pessimistic views on the same subject.

As the chart below shows, during this period of continual public angst on the subject of air quality, pollutant emissions fell significantly even as population, energy use, and the economy steadily grew. 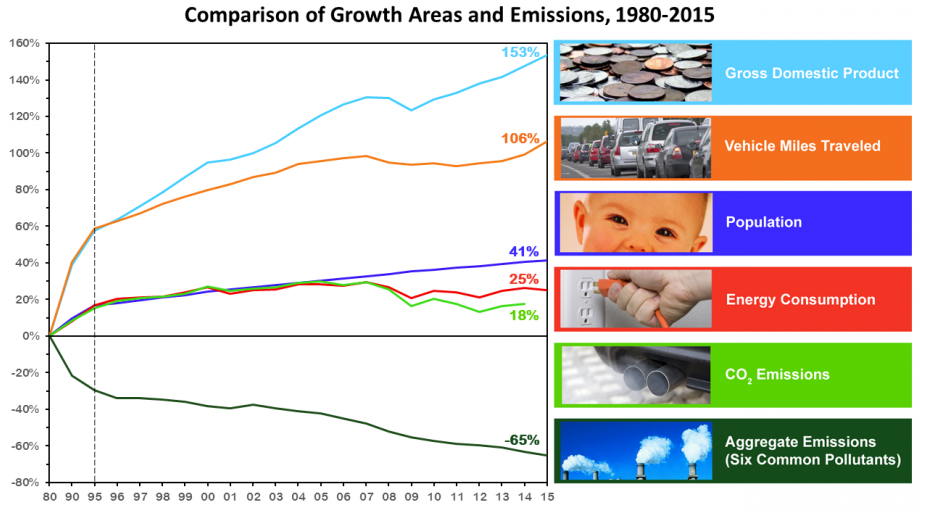 So what explains this disconnect? As the report notes, “With media more likely to report bad news combined with often apocalyptic framing by advocates and limited understanding of technical air quality information, it is no wonder that the public is often confused about air quality in their city, county, state, and nation.” That’s a gentle way of saying that Americans have been misled by the media and agenda-driven environmental groups.

This has led to a remarkable situation in which Americans are more concerned about the air they breathe than people in countries with off-the-charts air pollution. For example, the report notes that “The U.S. ranks behind countries like Bangladesh and Nepal in air quality satisfaction despite average fine particulate matter levels roughly 90 percent lower than these countries.”

So how does U.S. air quality actually stack up against the rest of the world? We compiled recent World Health Organization data on particulate matter (PM 2.5)—a key indicator of overall air quality—in major cities and countries around the globe. While sparsely populated Australia and Canada prevent us from breaking out the “We’re Number One!” cheers, the results speak for themselves: 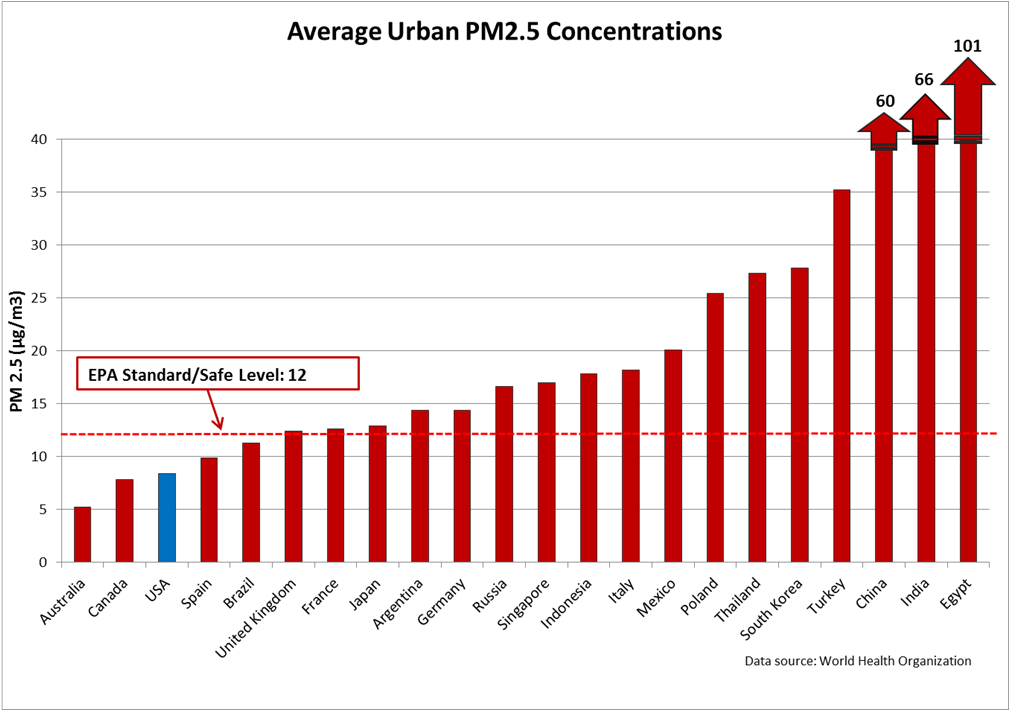 Similarly, WHO data shows that most major global cities—including iconic European cities such as London, Berlin, Rome, and Paris—can’t hold a candle to the U.S., and in fact are at levels well above what EPA considers safely protective of public health (PM 2.5 in major Chinese cities is quite literally off the chart). 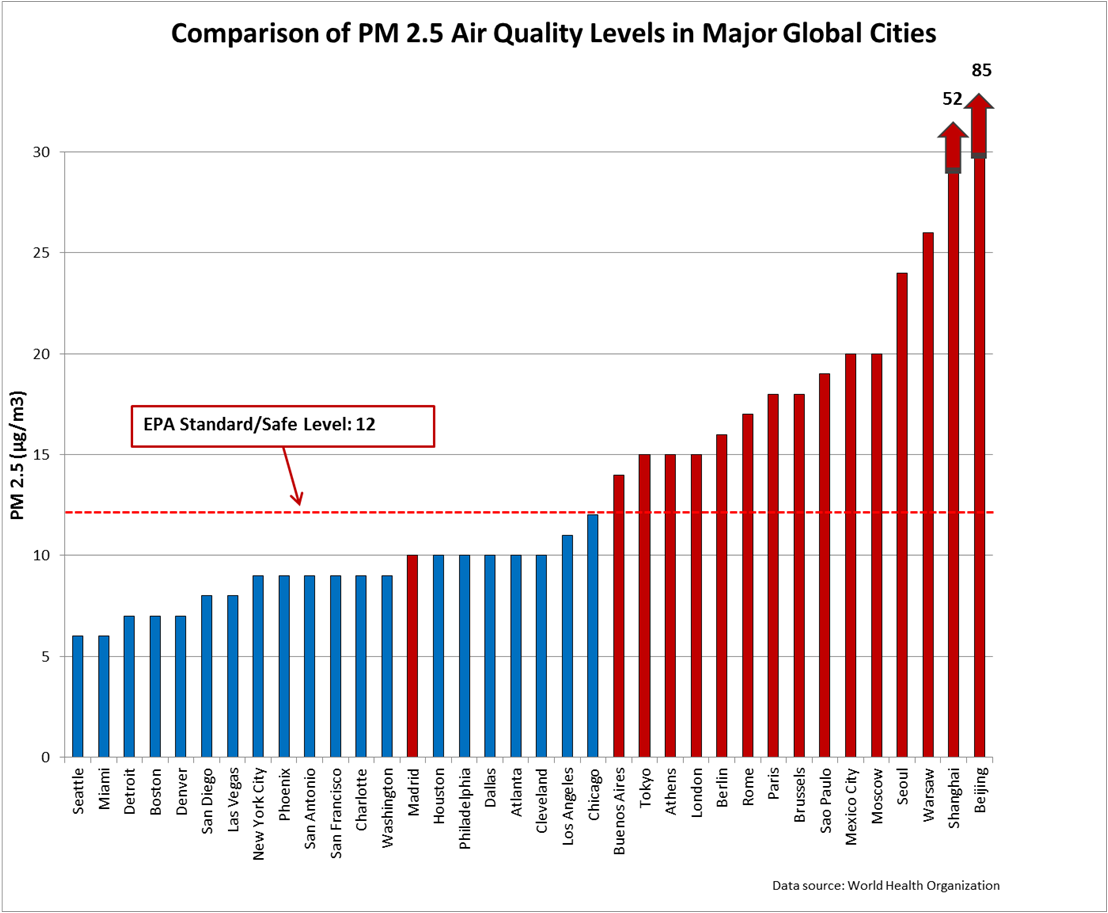 Of course, America’s clean air success story isn’t an accident, and it isn’t just the result of a few fortunate policies or innovations. These achievements are the product of a truly cooperative system involving EPA, states, industry, and environmental advocates working together on countless issues to advance technology and policy in a manner that fosters economic growth. Unfortunately, this cooperative framework was largely abandoned during the Obama Administration, and the longstanding approach of pursuing safer and cleaner use of energy resources was replaced with a “keep it in the ground” extremism that aimed to prevent use of those resources entirely.

New EPA Administrator Scott Pruitt rejects this philosophy and has promised to restore the fundamental cooperation that made Clean Air Act implementation so successful for decades. “We as an agency and we as a nation can be both pro-energy and jobs and pro-environment,” Pruitt told EPA employees in his first speech after being confirmed. “I think our nation has done better than any nation in the world at making sure we do the job of protecting our natural resources and protecting our environment while also respecting the economic growth and jobs our nation seeks to have.”

We couldn’t agree more. So with Earth Day approaching, we encourage you to tell the Greatest Story Seldom Told, and challenge the messages of doom and gloom that mislead the public and undermine sound policymaking.

@globalenergy
Did you know that many of the key technologies necessary for #decarbonization—such as solar panels, wind turbines and batteries—require large quantities of certain critical minerals? Join our #EnergyInnovates discussion on 6/24 to learn more. Register now! https://t.co/gcH0cDStjF pic.twitter.com/whVJqvVOuF