Cause for Concern in the Arctic 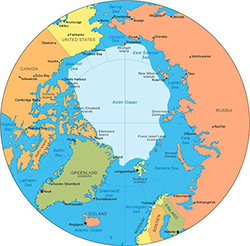 Two weeks ago, the United States took over leadership of the Arctic Council, an intergovernmental forum created in 1996 to promote cooperation and coordination and address issues facing the eight Arctic-nation governments and the region.  During America’s two-year leadership term, the Obama Administration has committed that the Council will focus on examining ways to counter climate change and protect the environment in the Arctic region.

To date, the Administration’s policy record on Arctic economic development is weak at best, marked by long permitting delays and by designating new areas as off-limit for economic activity.  This trend is of particular concern when considering that the some of the world’s largest reserves of oil and natural gas are found in the Arctic.  In addition, other Arctic nations are expanding development of the region’s oil and natural gas resources, and mining operations, and exploring opportunities for wind and hydro power use.

Retired Air Force Lieutenant General and former head of the U.S. Alaska Command Thomas McInerney  wrote an oped in the Washington Times laying out the challenges ahead.  In his piece, McInerny highlights a recent analysis by the National Petroleum Council, an advisory board to the U.S. Department of Energy, which recommends that the U.S. should facilitate exploration in the offshore Alaska Arctic now in order to maintain our global leadership, remain globally competitive, increase domestic production, reduce imports, and improve our long term energy security.

McInerney wrote, “Rather than use America's new leadership of the Arctic Council to limit energy development and counter climate change, Mr. Obama should strive to bolster his country's long-term energy security by supporting policies to expand U.S. access to resources off the Atlantic and Alaska coasts, and on public lands in the West.”

We should not squander the opportunity as head of the Arctic Council to show global leadership and advance our economic and energy security.  The Obama Administration must capitalize on all opportunities to promote responsible Arctic economic development - starting today.