The proposed Transcanada Keystone XL Pipeline would have provided the United States with the opportunity to access safe, reliable, and affordable energy supplies from Canada, and reduce our need to import crude oil from less stable countries and regions of the world.

Keystone XL is a $3.1 billion expansion project that would have connected a secure and growing supply of Canadian crude oil – developed from both traditional deposits and oil sands – with the largest refining centers in the United States. The much-needed project also included on-ramps for U.S. domestic crude that would have enabled growing supplies from the Bakken fields in North Dakota and Montana and from sources in Oklahoma to be transported to Gulf refineries. When completed, Keystone XL would have delivered up to 830,000 barrels of crude oil from Canadian and U.S. sources.

In addition to improving the nation’s economic and energy security, the proposed project would have provided approximately 42,100 badly needed manufacturing and construction jobs, and contributed an estimated $3.4 billion in benefits to the U.S. economy.

A stable, long-term energy supply is critical to our nation’s energy security, particularly when global supplies are often found in geopolitically unstable regions of the world and production from once-reliable sources is slowing.

Refinery modifications and pipeline construction create jobs and bring additional tax revenue and other economic benefits to their localities. The economic impact and long-term benefits of the construction of the Keystone XL pipeline are significant. 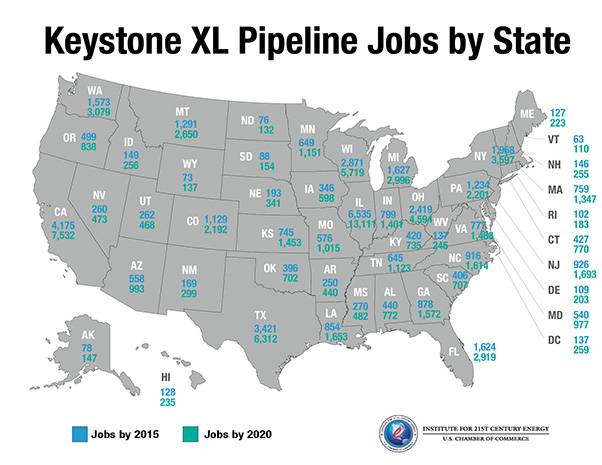